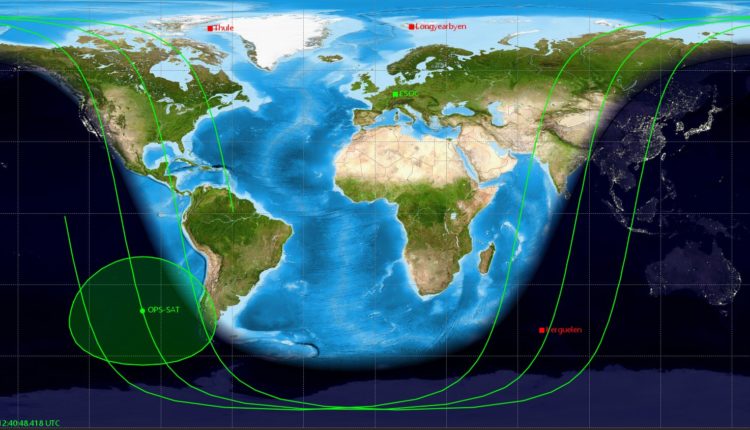 Between September 1982 and December 2020, at least 51,512 people were rescued on land and at sea by a network of Earth-orbiting satellites capable of detecting and locating disaster alarms.

ESA’s OPS-SAT Space Laboratory recently showed that by processing data from these beacons in space, instead of on Earth, as is currently happening, the whole process could be made more efficient, saving data and perhaps helping to save lives.

The humanitarian initiative in space

The Cospas-Sarsat International Cooperative was established in 1979 and remains a fundamental, life-saving system. Using a network of tools on board more than 50 satellites, it detects emergency beacons from planes, ships and people all over the world, transmitting the coded information to ground stations to be processed and then sent to local rescue coordination centers for response.

Disaster signals are basic radio transmitters which can be activated in emergencies, manually by pressing a button or automatically when certain triggers are detected – physical shock, contact with water, sudden drop in height, etc.

The Cospas-Sarsat system detects radio broadcasts in the protected 406-MHz band, collecting information on the type of ship in distress and transmitting its signals to ground stations on Earth, known as local user terminals (LUT). While some beacons contain the location of the ship in question, many do not, and for these ground stations they must perform mathematical analysis to determine the location of the ship. lighthouse.

Many low, medium and geostationary orbit satellites carry “repeater instruments” that shift the frequency of a 406 MHz radio frequency signal to a different frequency to avoid interference with the original transmissions. The so-called “up-converted” signals are sent to the user terminals, where they are processed and decoded.

Once confirmed, the beacon information is forwarded to the nearest rescue coordination center.

ESA’s OPS-SAT space laboratory is an orbital Cubesat open for experiments. It carries a very powerfulon-board computer and the ability to reconfigure its firmware in space. It was created with the specific intention of testing new missions to manage a mission in orbit, something too risky to try on existing, expensive satellites.

In a recent “in-orbit demonstration”, OPS-SAT performed the first decoding in orbit and processing of radio signals from emergency beacons on Earth, using open source software running on the satellite.

The small but powerful satellite successfully detects and decodes “reference beacons” – periodic bursts emitted by ground stations in the Cospas-Sarsat network to monitor the operation of the system. The difference? OPS-SAT transmitted only the necessary information contained in the beacons to the ESA mission in Darmstadt, Germany.

Direct processing of distress signals in space means that the spacecraft only needs to send specific beacon signals back to earth, not continuous recordings of the original raw signals (often empty because beacon transmissions are sporadic). The result? Far more effective communication.

First, this experiment shows that when spacecraft carry powerful on-board computers, they are able to effectively take over some of the “thinking” that is currently taking place on earth. When they not only act as forwarding devices, collect data and transmit it to more capable people or machines on earth, they can play a vital role in directly converting complex signals into action information. This successful demonstration paves the way for many future nanosatellites to join the current larger missions providing this basic service.

More broadly, when satellites are designed to be flexible, they can be configured to best meet the changing needs of the societies below them. This will be especially important as we enter the Internet of Things – when physical objects around us are interconnected through the Internet, creating a wide network of technologies capable of connecting and exchanging data with implications for our homes, health systems and even industry and global infrastructures.

OPS-SAT is the first-of-its-kind space mission open to the public to test its experiments in space.

“First, I proposed to investigate whether the on-board Software Designed Radio (SDR) and the OPS-SAT antenna are sensitive enough to receive search and rescue signals, although it is not designed for that,” explains Tom Mladenov, an experimenter. responsible for this demonstration in orbit, and a member of the OPS-SAT flight control team.

After it was confirmed that we could detect weak transmissions on board, I used GNU Radio to build a signal processing system that would work on the satellite. GNU Radio is a free open source library that breaks down the complex processing of signals systems in simple blocks The ability to reprogram the payload of the SDR for each type of signal demonstrates the flexibility when open source software is combined with a powerful space platform such as OPS-SAT. “

Dozens of experiments have already been conducted to demonstrate how smart computers in orbit can use deep training to help identify fires on Earth, automate collision predictions, and now improve efficiency in transmitting details to people in distress.

There are many more experiments ahead that push the boundaries of what satellites can do in orbit for the benefit of people on Earth.

This document is subject to copyright. Except for a fair transaction for the purposes of a private study or research, no part may be reproduced without written permission. The content is provided for informational purposes only.