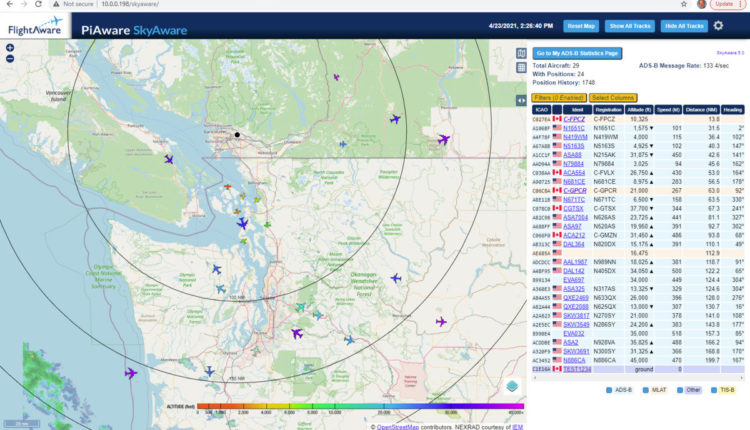 Automated aircraft tracking for the home enthusiast – BC Catholic

About a year ago, well, about a month before the announcement of the COVID-19 pandemic, I started tracking planes electronically. As it turned out, these were intoxicating days for the aviation industry: a historic number of passengers, record employment, a huge demand for pilots and, of course, an abundance of interesting aircraft to track an amateur.

Automated electronic tracking of aircraft by enthusiasts has been possible for several years, but what has made it particularly attractive recently is the relatively low cost. In fact, for some, the costs are generally zero.

Many readers of this piece will be familiar with the aircraft tracking applications that work on phones. The two dominant flight tracking services, FlightAware, based in Houston, and FlightRadar24, based in Stockholm, are particularly common. With such applications, it only takes one click to “see” an airplane near or in fact over almost any place on Earth.

What readers may not know is how this plane data initially gets into the app.

This is where the airplane enthusiast becomes part of the picture. Cheap and fast internet service combined with cheap computer power, along with some form of antenna, is all that is needed to set up an aircraft tracking station. Such a station “listens” on the frequency of 1090 MHz for the so-called ADS-B (Automatic Dependent Surveillance – Broadcast) signals from aircraft. Aircraft ADS-B emissions are becoming a global standard and data can be used for a variety of results, ranging from safety (automated self-separation) to delivering more efficient fuel routes.

The demand for commercial aircraft data is so great that companies such as FlightAware and FlightRadar24 will provide free turnkey tracking stations for free to enthusiasts in underserved areas.

In my case, there are already a lot of tracking stations in the Vancouver subway area, so I didn’t qualify for a free station. I did not see this as an obstacle, as I am naturally interested and curious about any and all forms of radio signals. So I decided to create my own station.

Initially, I experimented with generic software – defined radio (see my previous column for SDRs) and a simple antenna, which I glued to the end of a long pole of the artist, at a height of about six meters. However, I quickly realized that the better route was to get a special SDR for tracking aircraft. I stopped at Prostick Plus from FlightAware. It looks like a thumb and costs about $ 25.

After experimenting with odds and edges of flight tracking software running on a Windows 10 computer, I decided that a more reliable solution would be to dedicate a computer to the task. Not a typical desktop computer, keep in mind, but rather a small Raspberry Pi computer, the size of a paperback book.

What drew me to the Raspberry Pi was the fact that FlightAware had special flight tracking software called PiAware ready to go. Although I initially saw the Raspberry Pi’s route as a small obstacle, it wasn’t, and it made me try other radio projects with this form of computer.

All I needed was a Raspberry Pi computer (they can be purchased in several forms, starting at around $ 50) and a microSD card. After I learned how to put the PiAware file on the card and lightly touched Pi so that it could see my home Wi-Fi network, I was set up. I plugged FlightAware Prostick Plus into a USB port on Pi and connected a line from my antenna to the input connection.

It is! As I write this column, 435 days have passed since the flight tracker was turned on. He didn’t miss a day. In fact, he only missed an hour or two when there was a power outage in my area. I see the planes that my system tracks directly on my laptop, along with all sorts of interesting data about each plane.

I immediately started posting on my various social media shows about airplanes, which I found fascinating. About three weeks later, another enthusiast from the local planes saw some of my posts and quite unexpectedly arrived at my door with an extremely complex antenna. He explained that it was time for him to retire from some of his projects and wanted to give his tracking equipment to another tracking enthusiast.

From that day on, his antenna served as a source of data for aircraft tracking signals. In the interim months, I also started submitting my data to FlightRadar24.

You may ask what this has to do with the operators of these power stations, as the host companies repackage and resell aggregated data to airlines and airports. Both large tracking companies offer their enterprise-level accounts as privileges, free of charge. Such bills are usually priced at $ 90 per month.

I review my FlightAware statistics, which are very extensive, every day at 17:00 (corresponding to 0000 UTC) to check the number of aircraft monitored by my tracker, the number of positions reported, and the range distribution. My antenna is positioned in such a way that I have coverage in Oregon.

Every day I usually post one or two fascinating flights that I noticed through the tracker (I saw a Bangladeshi Air Force helicopter that was in the Fraser Valley for service, a NASA air telescope over Vancouver Island and no shortage of interesting executive planes during pandemic) and once a week I publish a collage of the most unusual planes found by my antenna and tracker.

So, the next time you look at any of these aircraft tracking apps on your cell phone, you’ll know how the data got there. It comes from hundreds, if not thousands, of small tracking settings like mine, around the world.