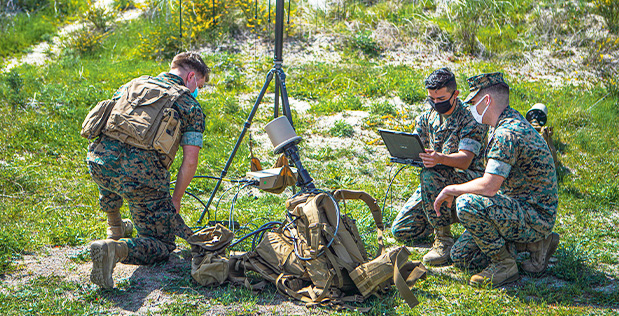 Mary Shurgot: Hello Tom. Thanks for having me.

Tom Tem: So tell us about this program you have, what you are aiming for – it’s called mission-integrated network control (MINC) – what problem are you trying to solve here?

Mary Shurgot: You understand, yes, MINC – at a very high level – is to get the right data to the right user at the right time. And what we have done is divided into three sub-problems. So the first subproblem is about finding network resources that would allow us to build the network to get that data to the user. And then the second area of ​​focus is to know how to configure these networks to activate this path to get the data to the right user. Finally, we take an integrated approach to the composition of the system. So, from a mission perspective, how do we map these mission objectives to the network objectives that allow us to build this network and organize this network?

Tom Tem: The point is that in a given situation and in a given military situation, there are many ways for data water to flow, you just need to make sure that they all stay connected, even though they may not be the same network.

Mary Shurgot: That’s right, I really like this analogy. So with MINC, not only do you know how much water needs to flow through the network, but what the individual components are on how to connect that network together and set these control parameters associated with those network resources.

Tom Tem: So the problem is that there may be many alternative ways to get the necessary communications from point A to point B in a domestic situation, but is it that the people involved, the military, have to constantly reconfigure manually and that’s distraction?

Mary Shurgot: Yes, manually reconfiguring, initially configuring a network based on mission needs is very challenging and cumbersome for combat. MINC will allow adaptation and flexibility even after the core network is deployed.

Tom Tem: So you are not looking to develop a network, you want to develop some kind of orchestration or control layer for a series of networks.

Mary Shurgot: That’s right. So within MINC we limit ourselves to the existing networks that are there, including old systems. We want to make better use of old systems and networks to achieve mission goals.

Tom Tem: So from the point of view of combatants, they just know that they can keep talking or communicating. And they don’t have to worry about broken connections, because this MINC system will take over and make sure the word passes.

Mary Shurgot: Exactly what is a little unique about MINC is that it can also recommend the movement of communication assets. So up to your point earlier you may find yourself in a situation where there are many possible paths to take or on – at the other end of the spectrum, not having enough roads. Thus, the MINC system may recommend to the operator or combat to move a specific communication asset to a specific location to allow this connectivity.

Tom Tem: Yes, so few predictable components so you don’t stay empty for a while while reconfiguration continues.

Mary Shurgot: Yes I understand you. You know, there is certainly a component for predictability and forecasting for MINC.

Tom Tem: And just as a side issue, there is a comprehensive network architecture that DARPA is pursuing, called Mosaic. In short, what is Mosaic and how does the MINC program you are working on fit into Mosaic?

Mary Shurgot: Right. So Mosaic Warfare is a comprehensive concept within DARPA. It is really moving away from tightly integrated, fragile systems from systems to adaptive flexible systems from systems. Just as the name suggests, you move away from a tightly integrated puzzle to a jigsaw puzzle where you can assemble more combat capabilities, and then the MINC program fits into that portfolio, addressing the network and communication aspect of Mosaic.

Tom Tem: Talking to Dr. Mary Shurgot, she is a program manager in the Office of Strategic Technology at the Agency for Advanced Defense Research Projects (DARPA). You also mentioned in the literature related to this – software-defined networks. I guess this is necessary for a network or series of networks to be reconfigured, first of all they need to be software defined?

Tom Tem: Sure. So basically MINC and Mosaic are designed for a messy environment.

Mary Shurgot: Yes, with Mosaic concepts we can bring option and variety and adaptability.

Tom Tem: And from a programmatic point of view it looks like from List of SAM.govthat you will enter into a contract to exit this MINC program. Why should a contract and not a grant and a bunch of people compete for it?

Mary Shurgot: So the agency’s broad message to MINC is currently coming out, as you did, as you just mentioned. MINC is really seen as a system program. So at the moment we do not envisage MINC to be a fundamental research program. But we strongly encourage integration between academia, trade and defense, including small business. MINC really brings together many different technologies where a diverse set of performers will really be needed.

Tom Tem: Is there anything commercial that mimics this, or is it somewhat similar to MINC? Because I imagine that some of the big content distributors, or whatever, need to have self-healing and reconfiguration networks to keep their service levels higher.

Mary Shurgot: Right. And we’ve already talked about a software-defined network. There are additional concepts from the commercial space. Another thing I like to focus on is something called intent-based or intent-based network management. So with networks driven by intentions, by commercial space, the idea is to move from a business goal or a business intention. And then you can autonomously configure your network based on this business goal. Within MINC, we want to rethink some of these trade concepts. And within the concept conceived by the network, really think of the intention as a mission. So how can we move from mission goals to network goals? And certainly the trade sector would help to inform this.

Tom Tem: It seems that this can lead to a system in which mobile phone calls are not dropped all the time.

Tom Tem: Well, well, we can always hope. And in the meantime, what is your chronology for this? When do you expect to have something tangible?

Mary Shurgot: Just like I mentioned [broad agency announcement] coming out now. We look forward to the proposals returning at the end of June 2021, and then we will launch the program in FY21, FY22. And then it will be a four-year program.

Tom Tem: And who evaluates the proposals? Is this done entirely within DARPA? Or do you put an old radio operator in your hand who might be helping you?

Mary Shurgot: Yes, we have a team of experts on the subject. So we evaluate proposals within DARPA and attract teams of reviewers.

Tom Tem: Well, Mary Shurgot is the program manager at the Office of Strategic Technology at the Agency for Advanced Defense Research Projects. Thank you so much for joining me.