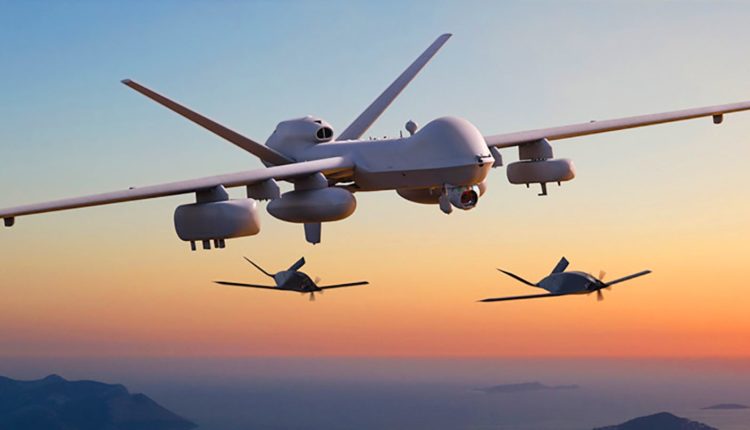 As part of the materials provided for SOFIC, GA-ASI also released works of art depicting the MQ-9, equipped with a self-defense pod, as well as AIM-9X Sidewinder rocket. The U.S. Air Force is exploring arming its harvesters with these air-to-air weapons for self-defense and potentially other roles, including shooting down incoming cruise missiles.

The MQ-9’s conceptual art, launching two of the smaller UASs, also shows that the Reaper is equipped with a scalable open intelligence architecture (SOAR) under its right wing and a Rosetta Echo Advanced Payload (REAP) under its left wing, both of which are also GA-ASI products. SOAR is a signal intelligence package that “provides identification, geolocation and characterization of RF signals of interest (SOI) to form an electronic battle line,” according to the General Atomics website. REAP is a system for communication and data sharing.

REAP highlights another potential future role of the MQ-9 as a communications hub and Danish link. GA-ASI says that this module “provides the basis for a communication gateway capable of Open Mission Systems (OMS) (ABMS building block)”. The open architecture system is designed to be easily adaptable and upgradeable to give existing systems additional functionality and allow for entirely new capabilities. ABMS is the United States Air Force Advanced battle management system program, which is a broad initiative to explore a wide range of new technologies for improvement networking and related opportunities, with a strong emphasis on leverage artificial intelligence and machine learning.

The REAP pod is also one of three pods that Air National Guard is now investigating as part of a large upgrade package called Ghost Reaper for its MQ-9. General Atomics was introduced for the first time the Ghost Reaper concept in 2020, a reaper from the 174th Attack Wing, an element of the New York National Guard, flew with set of pods Ghost Reaper during the recent iteration of annual Northern Edge exercise in Alaska.

The other two pods that are part of this configuration are the Centerline Avionics Bay Pod, which provides an expansion zone where various additional systems can be installed, and Northrop Grumman’s Freedom Pod. Freedom Pod contains the advanced ones Freedom 550 software defined radiowhich, depending on its exact configuration, has the ability to translate between a wide range of different and otherwise incompatible waveforms, as well as to play sports and infrared search and tracking (IRST) system.

Between REAP and Freedom 550, the Ghost Reaper concept could turn the MQ-9 into a powerful data synthesis node capable of gathering information from a variety of sources, including its own on-board sensors and ISR data collected from launched drones, and then help you push it towards other planes as well as friendly forces below. The air force said specifically that these pods will allow harvesters to “receive and transmit information to and from the older fourth generation and newer fifth generation aircraft”, main area of ​​interest for the service for years.

“REAP video bridge for video surveillance from Coyote Unmanned Aerial System (UAS) to ground command and control equipment”, according to history from Aviation Week last September. “Subsequent versions of REAP include Link 16 integration, providing low-latency tactical information to military personnel in the air and on the ground. This new capability will allow the Joint Terminal Attack Controller to identify an attacking aircraft for target.”

On Rayton Coyote family of small drones is another design that is becoming increasingly popular among the U.S. military as a whole. Over the years, coyote variants have been used in a number of research and development activities regarding swarming technology, especially within the U.S. Navyand the Block 3 design is now used in a new round of work in this sense, about which you can read more here.

On top of that, Freedom Pod’s IRST will offer a way to passively monitor air threats, both to the drone itself and to other assets it can handle, even thieving planes or missiles, and in environments where there is significant electronic jamming. .

All this is coming as the future of the MQ-9, in particular, is increasingly uncertain. Last year, the Air Force unexpectedly announced its wish stop buying extra harvesters, citing how vulnerable they would be in a higher-class conflict. The service then initiated a program to replace these drones, known as MQ-Next, about which you read more here.

Congress blocked these plans from inclusion of funding for additional harvesters in a defense spending bill that became law in January despite a veto by then-President Donald Trump. However, the Air Force continues to clarify that they are working go beyond MQ-9.

Of course, any future replacement of the Air Force’s MQ-9, as well as the Army’s MQ-1C, is probably still a long way from entering full-scale service, which means that Reapers and Gray Eagles could benefit greatly from improvements and additional opportunities this may make them more appropriate in higher-class conflicts in the near future. General Atomics says it hopes the smaller air-launched UAS, which unveiled this week on SOFIC, will take off for the first time in 2022.

Brinkley, director of strategic communications and marketing at GA-ASI, stressed that the development of many of these new capabilities, including work on Sparrowhawk and the launch of the ALE by the Army Gray Eagles, has already advanced significantly. “We’re not talking about a distant future here. This is not Star Trek.” He said.

As such, other existing and future Harvester operators, or other options and derivatives from this design, they might also be interested in these new features for their drones. This operator base now growing significantly thanks to the changes last year in U.S. government restrictions on drone exports.

Given that the forthcoming development of the MQ-9 and MQ-1C capabilities within the US military, especially their growing ability to launch smaller drones, potentially into network swarms, seems to be full of exciting new developments in the coming years. years, if not months.