The SolidRun mini-computer for $ 221 and up “SolidSense N8 IoT Compact” works with Linux on the i.MX8M Nano Solo with GbE, WiFi / BT, USB and a choice of LTE or PoE. You can also choose RS485 with CAN or BLE 5.0 with Wirepas Massive. 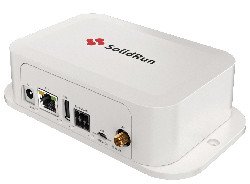 The four models listed here with key features include:

Initially, only the SolidSense N8 IoT Compact BLE model was available. It sells for $ 231 with Wirepas SDR pre-flash and $ 221 without. The images above for the BLE SKU show an LTE SMA connector, a SIM slot and a combined RS485 and CAN port, suggesting that the ports are present on all models, even if, as in this case, they are not activated.

Wirepas Massive’s decentralized network protocol can be used to connect, locate, and identify lights, sensors, beacons, assets, machines, and meters. The software improves wireless bandwidth through automatic multi-gateway and load balancing support, thus enabling large network networks with huge data requirements. The SolidSense N8 cloud service that supports Wirepas is offered as a platform as a service (PaaS) or can be implemented in the customer’s IT infrastructure. 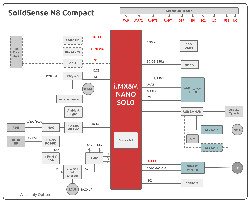 SolidSense N8 IoT Compact uses the rare single-core Solo version of i.MX8M Nano, the lowest power supply, but still up to a quad-core, based on the Cortex-A53 member of the i.MX8 family. At 1.5GHz, the SoC lacks a VPU, but offers a 650MHz Cortex-M7 chip.

SolidSense N8 IoT Compact supports Debian by default in the stack, which includes U-Boot with Mender OTA, remote control and additional support for Wirepass Massive 4.0. There is also a barebones option on the Debian stack with U-Boot only. The instructions show how to build your own stack with Yocto and BuildRoot, and OpenWrt is also supported.

All SolidSense N8 models are equipped with 1GB DDR4, 8GB eMMC and a microSD slot. Other standard features include Gigabit Ethernet and USB 2.0 ports plus an internal console port for debugging. An internal expansion header offers USB and multiple UART, SPI and I2C signals (see block diagram above). 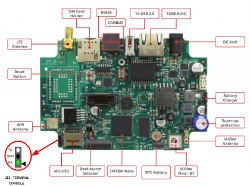 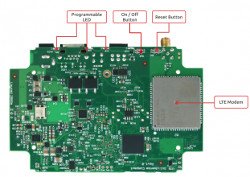 Detailed views of the SolidSense N8 motherboard, front and rear
(click on images to enlarge)

All systems offer a standard 802.11ac / Bluetooth 4.0 module in addition to the optional BLE / Wirepas and LTE / GPS radios. Wireless features include a SIM card slot, an internal WiFi / BT antenna, an internal GPS antenna for the U-Blox Nina chip and an SMA connector, and an optional external LTE antenna. The LTE radio connects via a USB 2.0 hub, unlike the mini-PCIe of the still-available N6 series. The block diagram suggests that you can replace LTE Cat4 with LTE Cat1 using the assembly option.

The SolidSense N8 IoT Compact has a 9-36V DC input with a Supercap backup, a battery charger and an optional 12V adapter. Other features include battery RTC, programmable LEDs and switches for power, reset and charge.

The fanless device does not have IP65 protection and an extended temperature range on the N6’s external model. The 150 x 85 x 40 mm system is smaller than the external N6 model, but larger than the internal model. The system has an operating range from 0 to 50 ° C and a plastic housing.