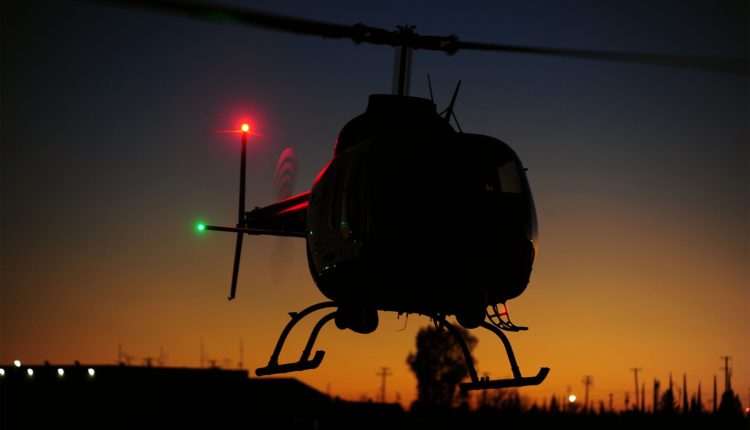 Effective communication is one of the most powerful weapons in the modern-day wildland firefighting arsenal. At any given time, a coordinated response to a wildfire threat involves a number of players, including command center personnel, on-ground firefighters and aerial support assets.

Depending on the situation, there could be multiple aircraft working a fire, including bird dog or command aircraft, helicopters, air tankers and waterbombers. Each of these aerial assets must support and communicate with firefighters on the ground as well as each other. Situational awareness is crucial to a safe, coordinated fire response.

Over time, communications needs have changed, becoming increasingly complex as more agencies become involved in emergency response. The need for a standardized communications protocol has long been recognized. Together, public safety agencies and industry equipment manufacturers have come up with a solution: Project 25.

Project 25 — or P25 — was developed by the Association of Public-Safety Communications Officials International as a harmonized set of guidelines for North American digital radio communications during emergency situations. P25’s main goal is to promote interoperable digital voice and data communications between all first responders. In the future, any first responders interfacing with U.S. government agencies will be required to equip with P25-compatible radio equipment. By 2022, for example, the U.S. Forest Service (USFS) is expected to mandate that only P25 digital radios will be allowed for wildland firefighting applications.

Starting with its first mission radio 25 years ago, Technisonic has grown its suite of airborne civil mission radios and audio panels, building on a modular platform that allows users to easily upgrade their equipment. Today, the company offers two product lines: the fully configurable TDFM-9000 family of P25 analog/digital/encrypted/multi-band AM/FM radio transceivers and the P25-compliant TDFM-136B transceiver, which handles analog and digital communications and multi-mode operations.

“The 9000 product line is geared at users who have multiple conversations going on at one time,” explained Huddock. “An example is an EMS aircraft. They have to be able to talk to the hospital, air traffic control, state patrol, etc. We get a lot of requirements for those missions. The 9000 line can go from one up to six internal transceivers.”

“Every person with a portable radio on their hip, whether police or EMS or fire, federal agent or military, that’s who we’re bringing in the helicopter to talk to,” Huddock said.

But while Technisonic customizes radio systems for most of its customers, Huddock said aerial firefighting is a “unique animal in the mission world.”

Fires, which fall under federal jurisdiction in the U.S., involve several federal agencies, including the Bureau of Land Management, the National Park Service, U.S. Fish and Wildlife Service, the Bureau of Indian Affairs, and the U.S. Department of Agriculture’s Forest Service. The National Interagency Fire Center (NIFC) brings together the national fire management programs of each federal agency and coordinates the communications on every fire.

“What they’ve done, unlike all the other agencies, is they’ve set the requirements for your radio,” said Huddock. “The operator must be able to change frequencies on the fly, monitor two different guard frequencies (emergency channels monitored around the clock), and must be P25 compliant to guarantee interoperability with other manufacturers’ radios. Your radio has to be tested and approved based on those criteria.”

Following the launch of its first TFM-138 25 years ago, Technisonic has continued to innovate to evolve with industry needs. Subsequent models include the TDFM-136 and -136A for P25 operations; then came the TDFM-136B.

“When we evolve a radio, we try as best we can to maintain the user interface and how it operates with the previous generations,” said Huddock. “If a pilot flies an aircraft with an older radio and they are used to it, we’ve tried to keep very consistent so the operators know what they are doing. It keeps continuity in operations and pilots don’t have to be cross-trained.”

He said Technisonic has committed to the aerial firefighting market and has kept its pricing stable over the years.

“We also provide a very solid service and a continuous operation, with full support for all our products — we still repair 15-year-old radios. We’re really the only one left in the aerial firefighting industry when it comes to certified P25 digital aeronautical radios capable of operating in more than one frequency band. If you’re fighting a fire, chances are you’re using a Technisonic radio.”

Evolutions in first responder communications technology are driven by industry standards as well as operator requirements, and Huddock said P25 is an ever-evolving standard. Operators also make requests for additional radio capability. A good example that Technisonic has introduced over the last two years is the multi communications port (MCP).

“We’ve added a new connector to our factory radios and new technology inside them to allow us to interface a handheld radio into the aircraft,” said Huddock. “Maybe there is a Super Bowl or a presidential mission or something like that. Airborne surveillance is necessary, but they need to talk to federal agents on the ground. Now, someone can jump into the aircraft, click in their handheld unit and easily integrate it. Now it comes through everyone’s headset.”

In addition to handheld compatibility, Technisonic took the extra step to integrate and control a satellite communications box with its radio, so it can be tied to land frequencies.

“Guys on the ground could talk through the aircraft and reach people thousands of miles away via satellite,” said Huddock. “Land mobile radio is the radio system that first responders use. The aircraft can become the bridge to allow these people to talk directly, and with MCP, we can now add satellite into it. We don’t know what tomorrow will bring, but with this technology in place we’ve taken it to the next step. There is the capability to control more advanced devices.”

Technisonic’s modular development process allows customers to upgrade their existing radios when new technology is needed in the field.

“We meet the needs of today but we’re trying to be ready for tomorrow,” concluded Huddock. “That is what has made Technisonic successful — the eye towards making sure the customer is getting something up to date and we can continue to support that product over a long period.”

When it comes to tactical radio, Canyon AeroConnect claims a pedigree dating back to 1970, to its predecessor Wulfsberg Radio.

“We sold thousands of the RT-5000, which was adopted globally for complex missions like aerial firefighting, ALE, EMS and search-and-rescue,” said Jim Jackalone, Canyon’s director of sales and marketing.

In 2017, the company introduced the RT-7000 Flexcomm next-generation software defined radio, a move Jackalone described as akin to transitioning from a flip phone to a customizable smart phone. Designed to be flexible and adaptable to changing technology, the RT-7000 employs an intuitive graphical user interface and modular architecture so new technology can be easily introduced into existing units.

“It allows the customer to adopt new technology without having to buy a new radio,” said Jackalone. “A good example of what we want to avoid is when P25 Phase 2 became a common requirement, it drove a lot of users to have to buy a new radio. We want to help our customers avoid that scenario and maximize their initial investment.”

“We saw there is a lot of interoperability requirements when different agencies get together,” said Jackalone. “How do you adapt your tactical comms system to add capabilities and maximize interoperability? We thought of that with the RT-7000 and focused on easily allowing it to adapt to additional capabilities. That includes wideband AM/FM VHF/UHF (29.7-960MHz), Motorola P25 Phase 1 and 2, and long term evolution (LTE) ­­— all can be added or subtracted according to the customer’s mission. We also allow quick interconnectivity with handhelds and other devices. We have this great amount of flexibility with the RT-7000.”

“End users have a huge impact on product development, as it is our customers who ultimately decide what technology or capability they need in products and communications systems.”

That means that when a helicopter arrives on scene following a natural disaster, the RT-7000 will enable it to bridge communications between the local sheriff’s department, the Coast Guard, state police and other first responders. Or, when fire crews are working in a valley without line of sight communications, an overhead helicopter can rebroadcast their transmissions.

Aside from the ever-changing P25 standard, the next big development Jackalone sees on the horizon is mission critical LTE, where LTE technology is used as a communication waveform for both voice and data. In the U.S., the FirstNet nationwide broadband network is being developed to promote public safety by ensuring interoperability between all first responders.

In the U.K., Canyon AeroConnect’s sister company, Chelton, was chosen in 2019 to develop a complete emergency services network aircraft communications system (ESN ACS). The first of its kind in the world, the system will provide mission-critical push-to-talk voice and high-speed data services over the LTE network. An evolution of the RT-7000 tactical radio, the system will be accessible by all U.K. police and air ambulance aircraft.

“We are also seeing LTE emerge as a requirement in other countries, like South Korea,” noted Jackalone. “Sooner or later, it will be one of the standards our customers will want to have in their airborne radios. Traditionally, tactical comms were voice focused; but more and more, there is a need to bring data on and off the aircraft as well.”

LTE-compatible radio equipment can be used to transmit key mission-critical information like fire maps, the location of ground assets and blue force tracking to superimpose the location of police on a moving map.

“A key to our philosophy is, you don’t have to buy another radio as technology changes. We can upgrade your existing unit,” concluded Jackalone. “We have police, fire, EMS and the U.S. Coast Guard using the RT-7000, and we’re able to tailor the design to suit a customer’s unique requirements. It provides operators with a great return on their investment.”

While it mainly focuses on military applications, Collins Aerospace’s advanced networked communications airborne tactical radio can be found performing civilian missions, too. In use with the U.S. Coast Guard (USCG), the latest Collins ARC-210 RT-2036 Gen 6 software defined radio and its predecessors are deployed with operators around the world on more than 180 platforms.

The ARC-210, which covers the first responder frequency band, can be tuned to communicate with emergency personnel on the ground.

“We have a proven record in Southern California of doing just that with the wildfires out there,” said Jay Pinckney, senior manager of business development, Airborne Communications in Mission Systems at Collins Aerospace.

“End users have a huge impact on product development, as it is our customers who ultimately decide what technology or capability they need in products and communications systems,” said Pinckney. “We listen to them to understand the problems they are trying to solve. Out of that, a set of requirements emerges that then turns into the capability OEMs build into their products and systems, in order to make customers more successful in performing mission objectives.”

“A key to our philosophy is, you don’t have to buy another radio as technology changes. We can upgrade your existing unit.”

For example, the USCG has purchased 14 C-27J Spartan fixed-wing surveillance aircraft, which will be outfitted with the Collins ARC-210 system, allowing personnel to communicate with other aircraft and shore forces during drug interdiction missions.

“Growing customer needs, expanding and more sophisticated threats around the globe, and the need for faster and more accurate information flow to command and control authorities have all played a role in the development of technologies we employ today,” Pinckney said.

When disasters happen, multiple agencies respond. The right airborne tactical radio system becomes invaluable in these situations, helping to coordinate resources and execute an organized action plan to save lives and property.