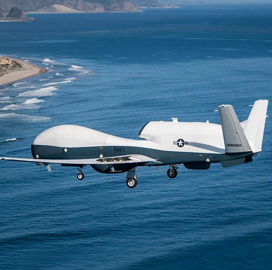 The US Navy conducted its first test flight on MQ-4C Triton drone system in the new configuration for integrated functionality-4 on the Patuxent River at the naval air station. The surveillance aircraft demonstrated its stability and control after a 30-month process of upgrading a multi-mission sensor, NAVAIR, on Thursday.

Triton’s integrated test team, consisting of representatives of the Navy, the US government and industry, and Australian partner organizations, attended functional control flights and initial aeromechanical test stations in Maryland.

The Navy plans to reach the initial stage of operational capabilities for modernized aircraft in 2023 as part of its plan for the transition to reconnaissance, surveillance, reconnaissance (ISR) and guidance.

Captain Dan McKin, head of naval programs for sustainable maritime UAS, notes that Tritons “will continue to provide unprecedented maritime intelligence, surveillance and intelligence capabilities that are particularly important to national interests with an increased focus in the Pacific.”

The navy plans to deploy Northrop Gruman-developed long-life ISR drones in five orbits around the world.