Details of the Deal

Valued at $294.1 million, the contract is projected to be completed in September 2024. Per the terms, the aforementioned radios will be installed in more than 400 strategic and tactical airborne, seaborne, and land-based (mobile and fixed) platforms.

Work related to the contract will be executed in Cedar Rapids, IA.

More than 40,000 AN/ARC-210 radios are equipped globally on more than 200 platforms. This surely reflects the solid demand that this communication system enjoys worldwide.

Increasing geopolitical tensions across the globe have prompted nations to strengthen their defense systems manifold. Notably, military communications, including airborne, air-ground, underwater, ground-based, and shipborne communications, form an integral part of a nation’s defense system for safe and secured transmission of data. Consequently, interoperability and better security of military services are the factors driving the growth of the military communications market.

With North America constituting the largest portion of the global military communications market, buoyed by increasing technological advancements in the region, Raytheon enjoys an esteemed position in this market.

These features must have made Raytheon’s military communication systems the preferred choice by Pentagon, as is evident from the latest contract win.

Looking ahead, the global military communications market size is projected to grow from $33.4 billion in 2020 to $40.6 billion by 2025, at a CAGR of 4%, as predicted by the Markets and Markets research firm.  Such solid growth projections should boost Raytheon’s top-line performance in the coming days.

What About Other Defense Majors?

For 60 years, Northrop Grumman (NOC – Free Report) has been a leader in the design, development, and delivery of end-to-end communications and advanced networking capabilities sought out by the U.S. and allied military forces. The company’s leading Battlefield Airborne Communications Node (BACN) gateway system reached 200,000 combat operational flight hours in February 2021 since its first deployment with the U.S. Air Force in 2008.

In the past year, Raytheon Technologies’ shares have gained 35.1% compared with the industry’s 26% growth. 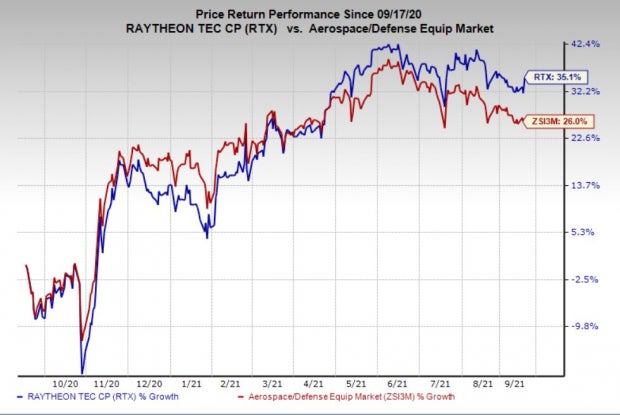