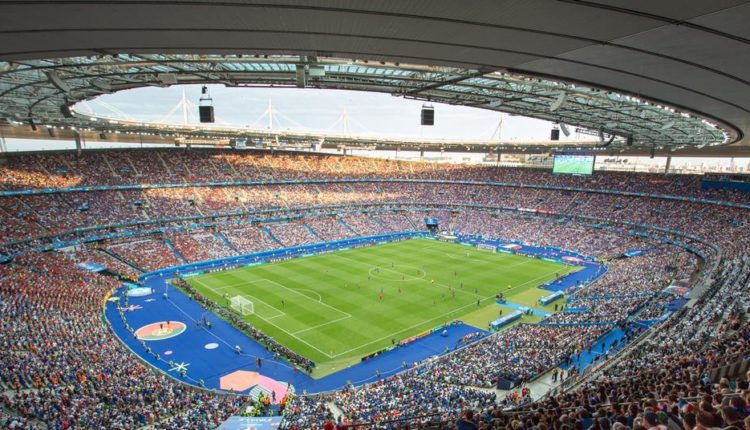 ”I’ve done a fair few major events but I’ve never known one quite like this in terms of challenge,” says Phil Bigwood, executive producer, BBC Sport, whose experience includes the London Olympics and three World Cups. “It’s a crazy situation but with only a few weeks to go neither ourselves nor UEFA know exactly where we can go.”

It is the uncertainty of travel between and even around countries as a result of ever-changing Covid conditions and regulations that is the biggest headache. Normally, live events of this scale – UEFA anticipates a total live audience in the region of 4.7 billion for the entire competition – are sewn up in terms of broadcast planning many months in advance.

Having planned for some element of remote production since postponing the event last year, UEFA decided to expand its remote operation further, just six months from the tournament’s start.

“It’s a crazy situation but with only a few weeks to go neither ourselves nor UEFA know exactly where we can go,” Phil Bigwood, BBC Sport

To give them more social distancing space and flexibility, the original model, in which match feeds are switched at a central International Broadcasting Centre (IBC) near Amsterdam was expanded to run with certain operations at IMG Studios in Stockley Park, London.

“We’ve been set up for major live remote productions since Covid started in spring 2020 so we have a highly Covid-safe work environment,” explains Brian Leonard, head of engineering at IMG Studios. “Since we would have had a significant number of UK-based IMG personnel working out of the IBC it was a sensible decision by UEFA to keep them here where there is less travel commitment.”

IMG not only has a long-standing relationship with UEFA, but its base at Stockley Park had the necessary resources and connectivity, with 20Gig of Eurovision circuits running between IMG Studios and the IBC. This connectivity is servicing the migration of the production quality control room to IMG, off-tube commentary as well a data pipe for 40 remote editing workstations.

Since last summer, there’s been a change in the number and locations of matches. In Spain, matches were moved from Bilbao to Seville in order to allow fans to attend. Meanwhile, matches which were due to take place in Dublin were also moved, with the Saint-Petersburg Stadium in Russia now hosting three group games and the quarter-final being allocated to Wembley Stadium in London.

World feed production from the 11 city venues (including Baku, Copenhagen and Rome) in 11 countries is native UHD 4K HDR/HLG. UEFA’s original plan was for a host city pairing concept where match production teams would move between two venues. Now, these technical and creative teams will remain in situ.

All EVS replays will be produced in 1080p50 SDR. All match highlights will be produced at the IBC and delivered to venues for inclusion in the multilateral feed. UEFA expects to produce 2000 hours of ‘packaged’ content (excluding ISOs, rushes, etc). Total production, including all feeds, all additional programming and all raw material (i.e. rushes), will exceed 3500 hours.

Over 3000 staff are working on the host broadcast with 1000 in the IBC alone.

Deltatre is once again providing on-screen graphics (and tracking system), designed natively in UHD to comply with the live stadium feed delivered at the IBC and delivered in the 16:9 graphics-safe areas.

Standard graphics for goals, bookings, shots and substitutions are included in the match feeds. These are complemented, where editorially appropriate, by additional graphics incorporating stats generated by the in-stadium data collection team. During a match, an average of 40 graphics from replay wipe to 7+7 player bios are broadcast (out of the 50 proposed by the graphics operator). 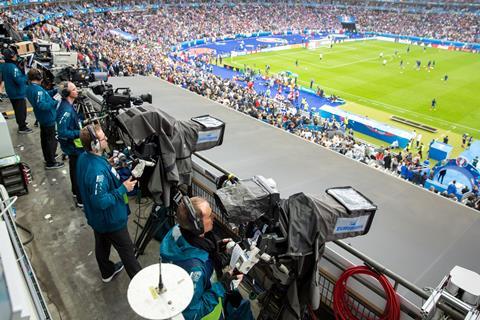 On the contribution side, Eurovision’s extensive fibre network is being used. Gravity Media is tasked with implementing and managing these signals, along with monitoring and quality control through a technical operations centre (TOC) at each venue through to the IBC.

The TOCs provided by Gravity Media will be supervising distribution of all UEFA on-site feeds, including those for Eurovision, UEFA broadcast partners and for VAR (Video Assistant Referee) – which is making its Euros debut – among others.

At IMG Studios, IMG’s dedicated UEFA facilities include: a 12-person production QC room, where each match will be editorially QC’d and helicopter cameras are co-ordinated; 15 craft edit suites; 11 graphics positions; and 11 digital editing points, all remotely managed from the IBC by MoovIT.

UEFA has also tasked IMG with supplying 24 ENG crews – one per participating team – consisting of a producer, camera-op (equipped with Sony PXW-Z750 or PXW-FX9V cameras) and media wrangler to record press conferences, sit-down interviews and training sessions delivered back to the IBC on a daily basis for rights holders to access. There are also ingest points for direct media uploads at Stockley Park for UK crews to use.

The IBC is in Vijfhuizen within Expo Haarlemmermeer, which is located not far from Amsterdam. This includes the Hive, a massive EVS-based server system and media asset management system. This is a repository of thousands of hours of content for UEFA Euro 2020 and from past Euro tournaments for remote access by rights holders.

“The Hive media asset system has grown and grown,” says Bigwood. “We are spoilt for choice with the content on there, whether that’s ISOs of team arrivals during match build up or interviews.”

UEFA also provides programming via the Hive for broadcasters who aren’t wrapping coverage with their own presentation.

The BBC is not one of those but is more reliant than usual on UEFA’s material given restrictions on sending camera crew to gather colour from city venues and team camps.

The majority of its output is produced in MediaCity based around studio presentation from Dock10.

A massive opening weekend on BBC One and BBC iPlayer starts with the first game of the championship between Turkey and Italy on Friday, 11 June, followed by Wales vs Switzerland on the Saturday, England vs Croatia on Sunday and ending with Scotland vs Czech Republic and Spain vs Sweden on the Monday. The broadcaster is sharing live rights with ITV, which has a ratings winner in England vs Scotland from Wembley on 18 June.

“The bulk of our operation is in Salford and we’ll be looking to see how the 21 June roadmap in the UK impacts us in terms of our ability to move around Europe or even be onsite at Wembley,” Bigwood says. “Every country has different rules and we are quite rightly careful and cautious and de-risking as much of our coverage as possible.”

The virtual set in regular use for Match of the Day at Dock10 studios has been given a Euro branding and an upgrade. The backbone of the system (Zero Density running Unreal Engine, Mo-Sys StarTracker, 360º green screen, graphics by AE Live) remains the same. 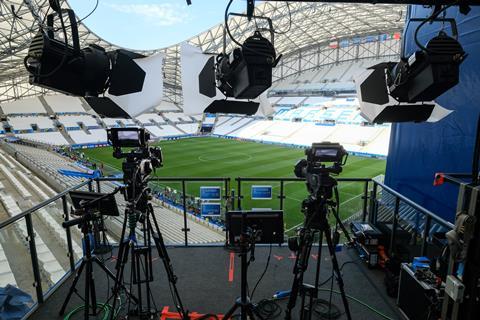 “We wrote the original control app for the ZD software to talk with the graphics in the BBC’s system,” explains Lewis Phillips, AE’s production director. “The Euros is a continuation of that workflow and model.”

Based on a concept by designer Jens Weber, the set’s graphics were tested and iterated by AE Live, which has been the BBC’s graphics supplier since 2017.

“The key is to get the graphics on camera as quickly as possible and do test events so we can tweak the design,” Phillips says. “We’ve built 15-20 templates integrating Opta stats which our operators can use, including group tables and VT screens.”

He adds: “The real challenge for everyone is around Covid. It’s the nature of the beast. The number of variables and late finalising of decisions, venue changes and multiple production models and how the balance of that has changed over the last 18 months.”

“The real challenge for everyone is around Covid. It’s the nature of the beast,” Lewis Phillips, AE

The set will make use of a 180º 4K stadium feed from UEFA as a way to take the viewer into the match. There is also the ability to display live full body 3D interviews with players and coaches from the venue in the studio. That’s similar to the ‘teleportation’ of interviews used by Eurosport in its recent coverage of tennis majors. Doing so from UEFA Euro venues depends on facilities onsite, notably lighting and eye-line monitoring.

The BBC is augmenting host feeds with a number of its own interview positions in and around games and eight unilateral feeds at most games, working with Timeline TV to deliver this.

“We are providing three levels of service to the BBC,” explains Martin Sexton, outside broadcast unit manager, Timeline. “The first is a full traditional OB model. Next is an IP-driven remote production model with presentation on site but with cameras sent back to Salford along with associated audio over UEFA’s GigE circuits. The third level is where either for logistic reasons or cost benefits we’ll deliver an OB lite. This will be a pitch-side presentation provided over host circuits to the IBC and onto Salford.”

The full OB (presentation and switching) is being lined up for BBC coverage of live matches including semi-finals and the final from Wembley. The BBC’s remote production will cover Scotland’s games from Glasgow while Timeline flyaway kits and teams will move from match to match around Europe.

Timeline will produce UHD 4K from Wembley and HD 1080p from around Europe due to bandwidth cost. The BBC will be streaming select matches in 4K over iPlayer.

Ball up in the air

Just 13 days before the opening match, Scotland’s Sheffield United midfielder John Fleck returned a positive Covid test. This had a knock-on to UEFA/IMG’s ENG crew who were staying with the Scotland camp in Middlesbrough to adhere to local legislation and to protect the teams and their staff.

What’s more, both Croatia and the Czech Republic made last-minute changes to their team bases. They had planned to be based in Scotland but as a result of Scottish Covid-19 regulations, which would mean whole team isolation if one player tested positive, those teams have opted to stay home and fly in to the UK for their matches.

Leonard says: “There are repercussions since the guys with the Scotland team have to quarantine and we will have to find a way to get crew to Croatia and Prague, also observing quarantine. That’s a real challenge with less than two weeks to go.” 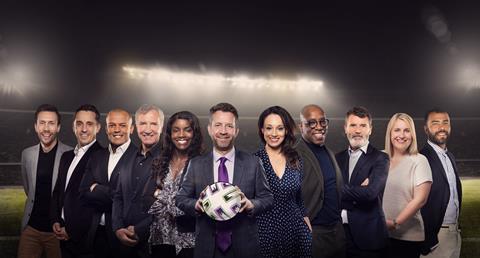 With 100GB telco pipes opening up between the major venues in Europe, it’s likely that future events of this scale will be done over IP. Already UEFA Euro 2024, which will be hosted in Germany, is being talked of as a target for an all-IP workflow.

Well before then though is the UEFA Women’s Euro 2022 next summer hosted in England and the Qatar World Cup which, astonishingly, is 18 months away and ticking.

“We jump from the Euros straight into those,” says Bigwood.

Upwards of 100 million viewers are expected to follow each live match, with the final set to attract a global average live viewership as high as 300 million.

According to UEFA, the total cumulative live audience for the 2016 tournament from France was almost 5 billion, with 600 million watching Portugal’s 1-0 extra-time victory against France in the final. Expanding the teams from 16 to 24 for the 2016 tournament netted another 1.1 billion viewers to the overall television audience.

LANtenna hack spies on your data from across the room! (Sort…