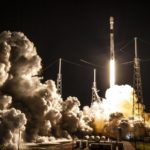 UK companies have received nearly £ 15 million from the UK Space Agency through the European Space Agency’s partnership program to develop the trio of satellites to come out of NASA’s Kennedy Space Center in Florida.

Oxfordshire-based Lacuna Space aims to simplify and reduce the cost of connecting sensors to the Internet, reaching every corner of the earth with the help of small satellites to support IoT.

Lacuna sensors can be used to monitor the environment, monitor wildlife and help farmers by providing data on bovine and crop health and water and soil management.

Two of Spire’s satellites in Glasgow will develop optical intersatellite connections (ISLs), which will allow satellite constellations to become integrated networks in space, capable of delivering a very large amount of speed data to anywhere in the world, including remote and rural areas, disaster areas and the sea.

Spire is backed by the UK Space Agency through the European Space Agency’s partnership program with a total of £ 9 million in total funding to develop a set of innovative technologies and data platforms, including a pair of satellites scheduled for tomorrow’s launch.

The third satellite was built by Hampshire-based In-Space Missions, backed by £ 4.9 million in funding for this and future validation missions, which are expected to launch in 2022/2023. The Faraday Phoenix satellite includes payloads for six customers, including Airbus, Lacuna, SatixFy and Aeternum.

The SpaceX Falcon Heavy rocket is scheduled to be launched from NASA’s Kennedy Space Center in Florida at 8:00 p.m. BST on Friday, June 25.

Taxi travel to space – other payloads on Faraday Phoenix’s mission:

The mission will manage the In-Space Babel payload as the first incarnation of a future digitally available payload with the Faraday service. This first version is high-speed, broadband software, defined with the ability to upload and practice a number of different applications – from tracking ship radars to creating heat maps for 4G mobile use.

Manchester-based SatixFy Space Systems is using the mission to demonstrate its satcom technology in space for the first time. The SacuxFy’scubesat computer will be the most capable product of its kind on the market, supporting up to 4Gbps data transmission and allowing companies to process large amounts of data in orbit.

The Portsmouth-based Airbus Prometheus 1 payload with software-defined radio will be able to study the use of radio spectrum around the world from orbit, detect radar tracking of the Faraday Phoenix satellite and potentially identify and locate search and rescue beacons.