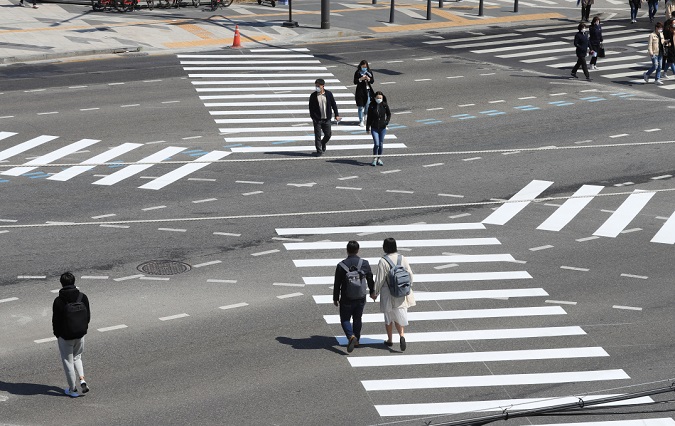 Diagonal Transition was newly installed in front of Yonsei University in Seoul on April 6, 2020 (Yonhap)

CHANGWON, May 17 (Korea Bizwire) – The southeastern city of Changwon has announced plans to introduce a new traffic system that automatically extends the “walk” signal when there is a pedestrian crossing the street on a sidewalk.

This system uses artificial intelligence (AI), which recognizes pedestrians on a sidewalk.

When pedestrians fail to cross the intersection within the walk signal, the system automatically extends the pedestrian light by about 5 to 10 seconds, allowing children, the elderly and people with disabilities to walk safely on the street.

The project comes after the city government launched a review of a pilot program for so-called “child protection zones” on high-traffic back roads to protect pedestrians from the dangers posed by changes in road signs while they are still passing.

The city government plans to install an automatic pedestrian extension system by September after selecting a child protection zone in consultation with Changong Jungbu Police Station and the Korean Traffic Authority.

After checking the effectiveness of the new system, the city government will expand the project in stages.