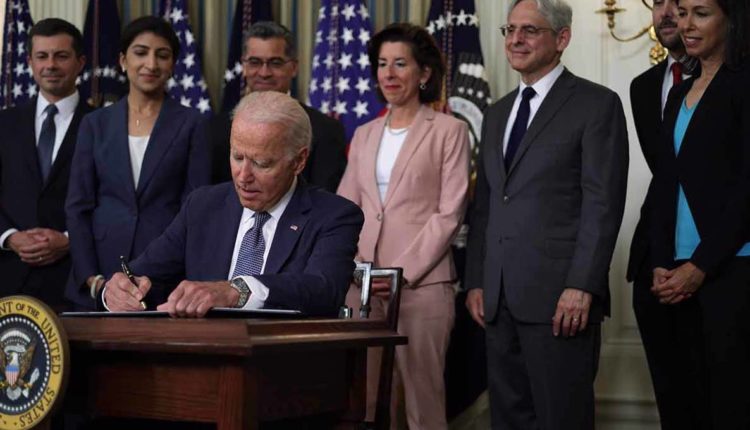 With a new order to combat anti-competitive practices in the US economy, President Joe Biden has focused on a problem that has been building up for years. Workers, consumers and small businesses change and the government, not the market, gives them the best hope.

New York – For free traders, government is always the bad guy. As President Ronald Reagan noted in his memory in the first place introductory address, “In the current crisis, government is not the solution to our problem; government is the problem. “

Since the 1980s, markets have been idealized as the only way to achieve optimal resource allocation. A healthy economy is driven by the spirit of entrepreneurship, not politics, because the price mechanism reliably transmits information about the value of goods and services. Buyers bid, sellers sell to the highest bidder and all parties are well informed and rational decision makers. An equilibrium price is always reached, guaranteeing an effective result. This is a perfect world.

However, the real world is not perfect. Market participants face transaction and information costs. Negative external influences and market failures are inevitable. Even ardent supporters of laissez-faire agree that sometimes some state intervention is needed, although the state must not do anything to distort market results.

But what if the greater distortion comes from market participants themselves? Given that today’s overlapping financial, health and climate crises are radically different from the ‘current crisis’ that Reagan had in mind, we need to consider whether the problem now is the market.

The current US administration seems to think so. President Joe Biden on July 9, 2021. executive order on “Promoting Competition in the US Economy” is read as a litany of market distortions and counterfeiting. The list is long, but among the prominent ones are major players in the agricultural, health, financial, pharmaceutical, technological and transport sectors.

The executive order is an opening volley against several issues affecting the US economy. These include over-consolidation within key industries; lack of market transparency; unfair, discriminatory and fraudulent pricing; barriers to market entry erected by existing companies; and anti-competitive dissemination practices. The victims include average internet users, users of social media and retail platforms, airline customers, new entrepreneurs and a number of small and medium-sized enterprises, including independent brewers and farmers.

Enjoy unlimited access to the ideas and opinions of the world’s leading thinkers, including long weekly readings, book reviews, current collections and interviews; The year ahead annual print magazine; the full PS archive; and more – for less than $ 9 a month.

All these groups are changed by companies that distort the market in their favor. In this new environment, “the buyer is careful” is a hollow saying. Once upon a time, a farmer could inspect a cow before buying it. If he didn’t notice the animal limping, that was his problem. But this kind of simple exchange between relative equals has been replaced by an extremely uneven agreement in which anonymous customers face big businesses in an asymmetric relationship that prevents bargaining or bargaining.

Worse, the same large businesses have consolidated their dominant positions through a number of fraudulent practices, such as misleading advertisements, surcharges and other pricing strategies that prevent product comparisons, and measures to thwart customers’ attempts to recover fees charged for services that were performed poorly.

In the financial sector, fraud, fraud and misrepresentation have long been addressed through regulatory oversight. Companies wishing to issue shares or bonds on official stock exchanges must disclose the information that investors need, and this compliance is actively monitored and enforced.

Of course, this system is far from perfect. In recent decades, regulators have not had sufficient resources and there has been an expansion of private offerings for securities. Yet the broader view is: markets only work when everyone plays by the same rules.

Companies will always be tempted to break the rules to gain an advantage. But in some sectors today, market erosion has gone far beyond deceiving consumers or the hard competitors of potential competitors. Pharmaceutical companies, for example, are major beneficiaries of legalized monopolies. They regularly earn patents for innovative products obtained from government-funded basic research, and regularly try to renew patents by simply altering the original compound.

But even these significant legal subsidies were clearly not enough for the industry. Large pharmaceutical companies are committed to further seeking rents by raising the prices of prescription drugs and blocking the production or distribution of generic and biosimilar drugs – even during a pandemic.

As far as Big Tech is concerned, customer and customer control and the preventive acquisition of potential competitors has become de rigueur. Dominant platforms present themselves as consumers, even when they deny users meaningful choices. For example, Amazon not only charges huge fees from retailers who have virtually nowhere else to go; it also competes directly with them.

In the same way, large social media companies have bankrupted many news media outlets, allowing their content to be presented without compensation. When Australia passed a law requiring digital platforms to compensate the media companies, Facebook is temporarily blocking Australian news connections on its platform and threatening to leave the country altogether. (The company released its virtual restraint only after a deal with Rupert Murdoch’s NewsCorp, while the smaller news remained far from the bargaining table.)

But the ultimate reward for distorting the market is for employers. Everywhere, big companies have used every trick in the book to dominate workers instead of competing for them. After decades of undermining unions and outsourcing wage-suppressing jobs, employers are increasingly resorting to non-compete clauses to tie employees at all levels to the company.

Such provisions currently apply to 28-48% of all employed people in the United States — everyone from restaurant workers to senior employees who have innovated and contributed significantly to their employer’s end result (by being denied any intellectual property claim they helped create) . Those who try to leave are threatened litigation, and U.S. courts have long sided with employers, who remain free to fire employees at will.

All of these asymmetric arrangements are like a hierarchy, not free markets that efficiently allocate resources, including human capital. Now that the Biden administration has turned its attention to these neo-feudal practices, free traders must applaud loudly.