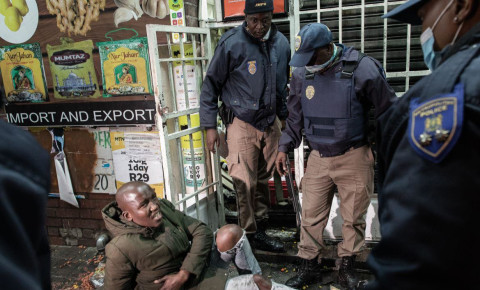 [WATCH] The government’s security ministers have briefed the media on efforts to quell the riots currently sweeping the country.


As SANDF troops were stationed in parts of Gauteng and KwaZulu-Natal on Monday night, the death toll from deadly riots crippling parts of the country in recent days has risen to 10.

On Tuesday morning, the government’s security cluster briefed efforts to try to contain the riots.

Police Minister Becky Celle said police had managed to use “timely and critical” intelligence to respond to “problems on the ground” and congratulated officials on “the way they handled the issue”.

Reading a pre-prepared statement, the minister said the situation on the ground was being monitored, adding that “we cannot allow anyone to mock our democracy”.

The briefing is the first time Minister Cele has spoken publicly since the riots began.

Boys! Bheki Cele says that the police used the intelligence on the spot to react quickly😳 He reads every word and moves as if seeing the words for the first time. His normal fiery menacing birth is gone! His usual waving of his finger and harassment of citizens has disappeared! Just meek

CONNECTED: SANDF has been deployed, but police are still calling, a defense analyst said

Bheki Cele contradicts reality. He says law enforcement is using intelligence to “respond quickly to hotspots.” He also says police are monitoring violence not to escalate. “Is he watching the same news as us?” mxm #eNCA # looting #ProtectSouthAfrica