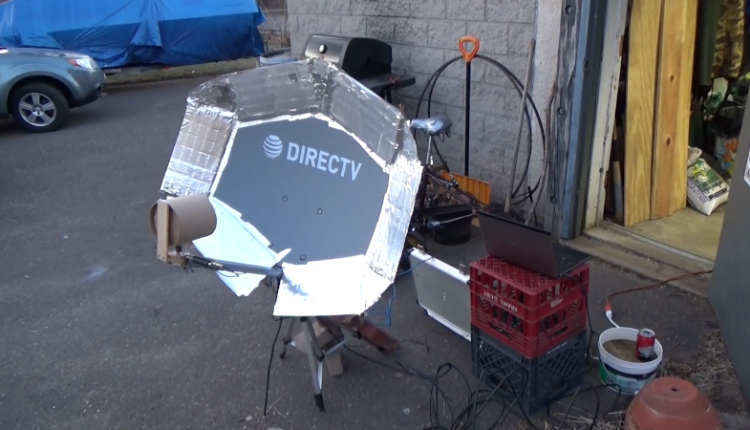 While the term “upcycle” is relatively recent, we feel like [saveitforparts] has been doing it for a long time. He previously built facilities to capture low-Earth orbit satellites, but now wants to take geosynchronous birds, which requires a better antenna. While his setting will not win a beauty contest, seems to work and save some garbage from the landfill as well. (Video embedded below.)

Small meals are cheap in the surplus market. The can makes a nice feeding horn using a classic canteen design, although this requires aluminum tape, as the only box in the bin is cardboard. The tape was useful when the dish turned out to be about 25% too small.

The dish is not just ugly, it will probably not oppose daily use. The bit error rate was a bit high, but he was able to extract images from GOES-16. It sounds like he has plans to air it out and install the dish permanently. The Raspberry Pi scripts would not work properly on his laptop, so he finally switched to Pi. The images looked great

It seems to be a ritual to build garbage station. You may be more fortunate with some of the others available software.