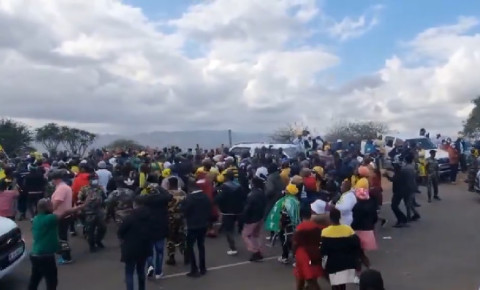 Police Minister Becky Celle has been called on social media for his apparent failure to take action against Zuma supporters, who are organizing mass rallies in Nkandla.

Police reportedly blocked the road to Nkandla in an attempt to stop supporters of former President Jacob Zuma.

This comes amid sharp criticism of Police Minister Becky Celle, the government and law enforcement agencies, who have been urged not to stop illegal gatherings.

Hundreds of supporters are holding demonstrations in support of Zuma near his Nkandla mansion in KwaZulu-Natal.

The former president faces jail after ConCourt found him guilty of contempt.

South Africans on Twitter have criticized Cele, SAPS and other cabinet ministers for failing to take a stand against Nkandla’s meetings, which violate Level 4 blocking rules.

Some doubt why police have acted swiftly on certain blockade violations during the pandemic, such as surfing during the beach ban, but have not arrested Zuma supporters.

The same President Ramaphosa, who instructs ordinary citizens to obey the law for fear of arrest, is silent when his own party grossly violates it. Weak, weak, weak. 🇿🇦

Police blocked the road to Nkandla, leading to a conflict between them #JacobZumasupporters and police. Hundreds of people flock to Nkandla to stand next to the former president. #eNCA‘s @AviweMtila is on earth with the latest. # DStv403 #AllAngles pic.twitter.com/kNbILoFauA

Yes, but Minister, where are the law enforcement agencies at these gatherings? We cannot tremble when we can prevent this. Are there clear provisions or do they only apply to some?

Cyril Ramaphosa, Becky Cele and Nkosazana Zuma should no longer bore us with rules.

They do not apply to Ace, Malema and Zuma supporters. Why then do they apply to us?

The state needs to open up, and everyone can exercise caution in their own way while receiving vaccines.

A brilliant strategic move by Zuma supporters, who are currently organizing a super-spread event in Nkandla so as not to include joggers, dog walks or baristas in their gathering. The first look at these and #BhekiCele he would enter with riot police and water cannons.

Collins Hosa was killed by soldiers for innocently drinking beer in his own backyard during a lockout.

Still, crowds gather in Nkandla for Zuma, but does SAPS act powerlessly to disperse the crowd during level 4 and the third wave?@SAPoliceService different rules for different people?

EDF
At Magashule
On Nkandla

The state seems powerless against them. But ordinary citizens deal quickly when they break Covid’s regulations. Is there an animal farm we have now?

BHEKI CELE MAY ONLY BE RESTAURANT BUILDERS, TAVERN OWNERS AND ORDINARY SOUTH AFRICANS, BUT WHEN IT APPLIES DIFFERENT RULES TO NKANDLA AND NKANDLA. pic.twitter.com/AGNVFhVZux

There are more than a thousand police officers gathered in Empangeni, specially deployed to deal with supporters of @PresJGZuma. Why this repressive “demonstration of force”, but when @Julius_S_Malema and #EFF he was marching in a huge crowd, there was no policeman in sight!

He just tried to block our convoy on our way from Ashou to Nkandla from SAPS, which is trying to block us. We confronted the police and told them that they had no right to stop us. They missed us. Almost in Nkandla now! #HandsOffMsholozi!! ✊🏾
THE FIGHT MUST!