Effective and secure communication links have always been a fundamental requirement for navies, with modern fleets flying heavily on radio and satellite technologies. And, with the increasing build-up of the network-centric environment in the military, capable networks for voice and data-transmissions are becoming even more important.

To be able to work securely and efficiently for the interaction of modern command, control, communication, computer, intelligence, surveillance and reconnaissance systems, today’s systems must not only be operational at any time, but also during intense military engagements. They must also ensure secure and stable connectivity as well as interoperability between a number of different kinds of platforms in different physical environments, from submarine to surface, land, air and space as well as between joint and coalition forces. Furthermore, they must be robust enough to deal with a constantly rising amount of data transmitted and an increasing number of different participants such as unmanned areal vehicles.

Existing networks of communication satellites in space, either owned by the military or rented commercially, are the backbone for controlling and connecting naval platforms around the world, which rely on different radio frequencies to get their messages cross. But can they hold up to the demands of the future? Military experts say that even the most capable communication satellites will become bottlenecks in the future, as voice and data traffic grows due to the low transmission rate.

It has been suggested that if these bottlenecks are to be avoided, naval forces could switch from electromagnetic waves to laser beams. This could increase the bandwidth by a factor of 1,000. First components for precision tracking, pointing and acquisition capabilities, however, must be developed and installed into subsurface, surface, air, land and space assets.

This approach has already been tried by the US Air Force for its Transformational Satellite Communications System One program, but had to be canceled due to its increasing costs.

“Today’s systems must not only be operational at any time, but also during intense military engagements.”

Surface communication links offer a challenge for future communications. These links can offer much higher bandwidth as well as the ability to work in a joint and multinational environment with their different equipment and standards. They are also secure and jam resistant. Furthermore, a number of different methods already exist that can be implemented in single software defined radios (SDR), which can cover different waveforms and functions.

The US Department of Defense has based its joint tactical radio system (JTRS) on this premise. It is supposed to work with existing military and civilian radios and systems. In the end, it should be able to operate on many different waveforms such as the tactical data links Link 11,16,22 or the UK Bowman tri-service HF, VHF and UHF tactical communications system. The JTRS is built on an open-architecture software communications architecture.

Today’s SDR technology capabilities can already be seen with the digital modular radio (DMR) from General Dynamics C4 Systems, which reduced the number of old radios on board various US Navy surface vessels and submarines with one system by up to more than 50%. The software-defined DMRs communicate with ultra-high frequency satcom, SINCGARS, and line-of-sight and high-frequency radios.

“Existing networks of communication satellites in space are the backbone for controlling and connecting naval platforms.”

SDR laser transmitters could also become a way for connecting land, surface water and airborne platforms. Free-space optical (FSO) communication links provide high-bandwidth communication that is difficult to jam or detect, although it can be disturbed by atmospheric conditions.

Laser technology enables the transmission of data between ships of a naval unit with high data transmission rates and safety from interception. While the direct mode between two transceiver terminals offers very high bandwidth, the retro-reflector mode has minimal power requirements and is unburdened by active pointing or tracking. German company Carl Zeiss, for instance, developed an eyesave laser communication system for mobile unit networking which delivers a bandwidth of 1Gbps up to a line of sight distance of 50km.

While efforts are moving along elsewhere, submarine fleets still pose a special challenge for navies around the world. Most solutions so far are based on buoys and are typically one-way. Keeping factors such as speed, depth or the boat’s stealth in mind, developers are trying to integrate modern satellite communications, higher data rates and two-way networking capabilities into submerged communications.

The German Navy is to receive a two-way tethered buoy system, Callisto, for the second batch of its 212A Class submarines. This will add SHF satcom as well as Battle Force email, Link 11 and Link 16 to the already available UHF satcom.

US company Raytheon has also developed a technique to communicate in real time with a submerged submarine at classified speeds and depths (called Deep Siren tactical paging (DSTP)). The expendable untethered buoys can be launched from a submarine, aircraft or surface vessel. The devices then translate satcom messages into a robust and secure low-data-rate underwater acoustic signal that allows an operational commander to convey messages to the submarine in real time.

As part of the US Navy’s communication at speed and depth (CSD) program, which is looking at ways to integrate submarines into the GIG, an industry team including Lockheed Martin is also developing three types of expendable buoys.

They have developed two submarine-launched, self-scuttling, tethered buoys with real-time data transfer via iridium and UHF satellites and one untethered acoustic-to-radio frequency gateway buoys to establish a link to an iridium satellite or via UHF to an aircraft nearby, which can also launch this buoy. Using underwater acoustics, it provides short-range two-way as well as one-way long-range communication.

The use of buoys could, however, become obsolete in the future. Based on technology developed in the 1990s, the US has begun the tactical relay information network (TRITON) research program to develop a blue-laser submarine communications system to link submerged traveling boats with nearby aircraft. Companies have been asked to develop a prototype for evaluation during the Rim of the Pacific naval exercise in fiscal year 2012. If successful, coordination between aircraft and SSN for ASW purposes and communication to SSBN could be enhanced considerably.

Modern surface and submarine vessels still have a number of different computer networks on board. If these can be transformed into a common hosted computing environment across an entire fleet, it could free up communication resources.

The consolidated afloat networks and enterprise services (CANES) program is one step towards a consolidated tactical “cloud computing” network. It will consolidate networking hardware and centralized software to be accessible by users on sea and land. It will modernize the networks fitted on US warships, converging and consolidating them, based on modern IP infrastructure. The primary goal of the CANES program is to build the secure afloat network required for naval and joint operations. At the same time it will integrate servers, workstations and networking systems with the US Navy’s shore-based next-generation enterprise network and the GIG.

A number of communications technologies being designed for the future will require large, radiating antennas, which can present various problems. Besides the simple need for space for installation, they can increase the ship’s radar cross section or cause electromagnetic interference and even mutual blockage, affecting each other through electromagnetic radiation because of their close proximity. These problems also have to be observed as part of the increasing demands for bandwidth, multiple bands and low observability for satellite communication.

“Modern surface and submarine vessels still have a number of different computer networks on board.”

The solution could lie in consolidating the antennas and sensors on most warships into a single unit. To achieve this, Thales Netherlands has begun its integrated sensor and communications suite, which is supposed to house the friend or foe identification, radio and data-link communication systems, radar and electro-optical subsystems into a single structure.

The company claims this lowers maintenance costs and reduces the cooling and power supply systems into a single large unit, reducing electrical consumption, weight and space. The single structure, with its clean lines, also reduces the radar cross section.

The US Navy is looking for a scalable family of electronic warfare, radar and communications capabilities to support multiple classes of ships and other navy platforms. It also plans to reduce the topside apparatus on today’s ships through the use of integrated, multifunction, multibeam arrays. In 2009, the US Navy awarded 18 contracts to develop integration and management technology for radio frequency radar and communications functions on future naval platforms. The advanced multifunction radio frequency concept has the objective of integrating radar, electronic warfare and communications into a common set of apparatus with signal and data processing, signal generation and display hardware. 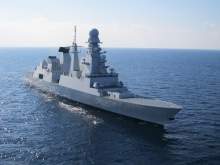 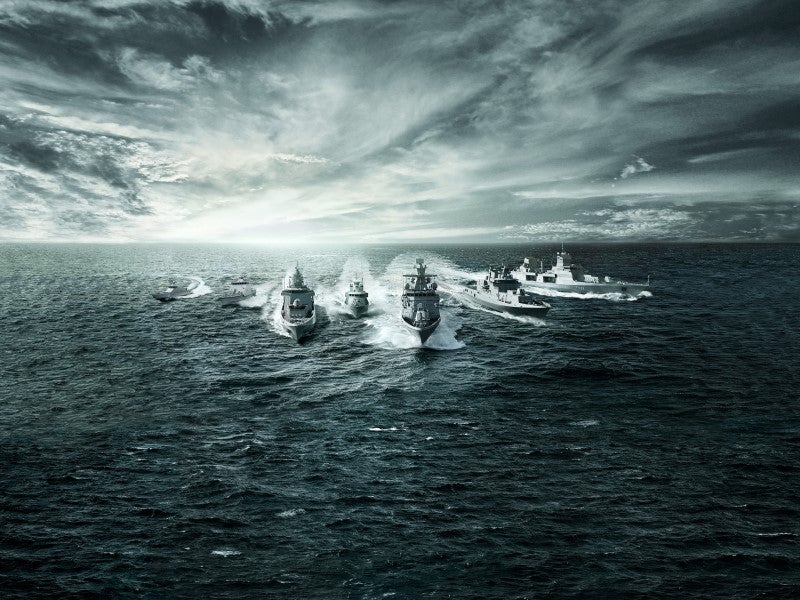 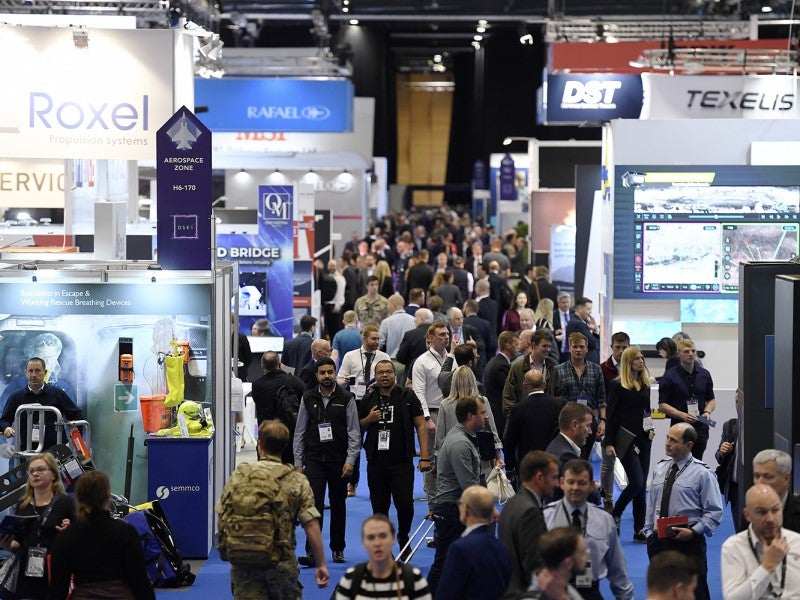