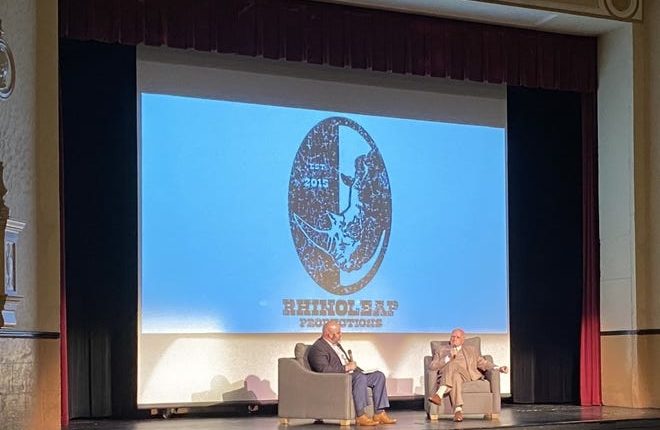 It’s 7 pm, and despite the heavy rain on a Tuesday night, people still enter the Sunset Theater to join the premiere of a documentary series.

The “Making North Carolina” series created by VentureAsheboro and RhinoLeap Production showed three documentaries out of the seven that would tell the stories of North Carolina entrepreneurs from the Piedmont and Triangle.

Thank you for supporting local journalism with your subscription.

Jonathan Thill, co-founder of VentureAsheboro, said the company received a $ 103,000 grant from NC IDEA, a private foundation that supports entrepreneurship. The allocation for the series was $ 20,000, which was used to engage RhinoLeap Productions for videography, editing and the premiere night.

Jeremy Skidmore, artistic director for the production, greeted the audience explaining the documentaries would be broken into three parts with a Q&A at the end. The entrepreneurs featured were Jerry Neal, Leigh-Kathryn Bonner and Algenon Cash.

Here is a deeper look at Randolph County’s entrepreneur Jerry Neal. Neal’s accomplishments can be further found in the documentary; some of the responses were taken from the series.

‘The things I loved as a child; I still love today ‘

The first documentary featured Jerry Neal, co-founder of RF Micro Devices. The company changed the world of communication with the production of a tiny cell phone chip.

He currently lives on the same property where he was raised near Asheboro, not too far from the Linbrook Estate. The documentary dove deep into his early inventions and love for electricity at a young age. One of the creations was a microphone made with a band-aid box.

Neal said radio and communications had been his number one passion, starting at eight years old. He said it all started with his father, who, under the GI Bill, could take anything he wanted after the Second World War. His dad wanted to learn about radio, so he was sent all kinds of equipment.

Neal started studying people essential to electricity, such as Benjamin Franklin, who was famous for his experiment, but even at a young age, Neal knew a person should not stick a wire up a kite if they wanted to live. So he continued to read books to learn how radios worked.

He will never forget a conversation between his mother and other ladies talking about their sons. When asked what he did, his mother said he liked playing with wires. He was really building a Marconi radio transmitter.

“I started building these transmitters, and as a matter of fact, that’s what I’ve done all through my life,” Neal said. “The interesting thing to me is the things I loved when I was eight years old are still the things I love today.”

‘An emotional attachment to the museum’

As the owner of the Linbrook Estate, Neal’s interest in John Deere spearheaded the museum on the estate. Neal said he got involved because Deere never lived long enough to see the company that he started as a blacksmith.

“The Midwest was a terrible place to try to farm because they had to stop all the time. So, John Deere solved that problem,” Neal said. “When you think about it at the time, he did that in 1830, 95% of the people in the United States were farmers, there was a linkage between industrial development and what happened in the farms.”

Neal has a very emotional attachment to the machines and thought a museum was a great way to share this information and get other people interested in it too.

‘A dream to broadcast around the world’

Neal also has an attachment to the radio and is getting ready to use his state-of-the-art radio tower. In his youth, he used the radio as a social outlet to get the attention of some girls who operated from the standard broadcast.

Now his new antenna will amplify the signal by a factor of 10, making it unique with fiberglass.

“The antenna is a flat copper that’s on a motor inside. When you turn your radio on, it puts out to the right length of the probe, and the length of that has to be attuned to the highest frequency,” Neal said. “It’s the latest technology; there’s, to my knowledge, not a better antenna anywhere.”

He credits his love for radio to the founder of radio Guglielmo Marconi. He remembers studying that Marconi and his family got free tickets on the Titanic, where his radio was on the ship. However, he had to stay, and then days before the voyage, one of the boys was sick, so the family never went.

Neal thought it would be fantastic to be on an Atlantic crossing where he operates one of those Software-Defined radios, communicating through an internet connection back to his station in Randolph County, broadcasting worldwide.

‘That was probably the most fun period of my life’

The co-founder had faith in his company with Bill Prat and Powell Seymour that started in 1991. Neal said Bill brought the idea to create a power amplifier with a microchip. However, the three did not know the market for the cell phone would be as large as it is.

The first power amplifiers they built were one-millimeter square with manufacturers like Motorola and Nokia.

“We knew that if we could do this microchip work, we could sell it for $ 1 and a half,” Neal said. “We can probably make these for about 25 or 30 cents and so $ 1 and a half gives us the huge amount of profit.”

He was amazed that they were able to expand, despite what he called five near-death experiences of the company. He said they continued to work harder and kept focus,

“Within about eight or nine years, we were shipping the dollars’ worth of chips a year and had a lot of fun. That was probably the most fun period of my life,” Neal said.

For those who missed the premiere, a fourth installment of the series will take place on Sept. 23 at 7 pm The fourth part will focus on STARworks, an arts-centered workspace that promotes community and economic development by providing artistic, educational programs and business ventures.

Tickets can be purchased at https://www.eventbrite.com/.

Petruce Jean-Charles is a Government Watchdog Reporter. They are interested in what’s going on in the community and are open to tips on people, businesses and issues. Contact Petruce at pjeancharles@gannett.com and follow @PetruceKetsia on Twitter.