Learn how robots can be precisely controlled dynamically in near real time, and be connected to people and machines locally and globally.

5G development and deployment are accelerating, especially in Asia. Field trials are underway, components are coming, and testing covers the spectrum in more ways than one. What are the challenges and how is the ecosystem shaping up? Find out more in this month’s In Focus series.

If robotics and cellular communications seem strange bedfellows, it’s because the fifth generation of wireless, 5G, is the first to wirelessly address the need of such applications rather than just increasing data rates and expanding coverage as previous generations did. This ambitious standard, called IMT-2020 by the International Telecommunications Union (ITU) that globally regulates them, will accomplish this by completely revolutionizing the way cellular networks are built, the devices they can connect with, the frequencies at which they operate, and the applications they serve.

The fifth generation of wireless technology will pave the way for a new generation of robots, some free to roam controlled via wireless rather than wired communications links and exploiting the vast computing and data storage resources of the cloud. Armed with these capabilities, robots can be precisely controlled dynamically in near real time, and be connected to people and machines locally and globally. In short, 5G will fully enable applications such as the “factory of the future” and many, many others that were previously beyond the capabilities of both cellular and robotics technologies.

[Download]Calibre in the Cloud: Unlocking massive scaling and cost efficiencies

But Will They Still Need Us?

There’s a lot of controversy these days surrounding robotics and how along with artificial intelligence (AI) they will come to rule the world, including some containing rather draconian prospects for the fate of humanity. The champions of robots believe they will complement people rather than replace them, and perform some functions that humans aren’t very good at anyway. On the other side is some who believe that robots can take the place of humans in manufacturing and other industries, eliminating millions of jobs. Whether or not robots will ultimately look down their artificial noses at humans remains to be seen, but 5G is almost certain to let them function more efficiently and serve more applications than ever before.

Robots are already ubiquitous in manufacturing, of which the auto industry is perhaps the most obvious example. Other key applications examples include industrial and medical. The innovations within 5G will expand their capabilities so much further that it will be necessary to expand the definition of what a robot really is. So autonomous vehicles are robots, executing instructions from a vast array of sensors to make decisions and perform functions, presumably a lot more accurately, reliably, and faster than humans. Gyrocopters and other unmanned vehicles fit this category too.

To understand the synergy between 5G and robotics, no better example is healthcare where robotics have immense potential. Not only will robots perform mundane functions such as transferring things from place to place in a hospital, aided by 5G communications and the cloud, but they will also enable telesurgery in which operations are orchestrated remotely by doctors and performed locally by robots. This was demonstrated for the first time back in 2001 when endocrine surgeon Jacques Marescaux (1948–) removed the gallbladder of a patient in Strasbourg, France while sitting at a console in New York City—a distance approximately 6,200km away—during an event appropriately called Operation Lindbergh.

Flip forward to about 2025 and imagine operating rooms in one hospital populated by robots and humans connected by 5G through the cloud to surgeons anywhere on Earth who orchestrate the surgical procedures. They could be aided by specialists in one or more locations who can lend their expertise, all in real time. Fantastic though this might seem, it’s just the beginning: Using virtual reality (VR)—and the ever-present cloud—it should be possible to convert an imaging scan into a virtual, three-dimensional (3D) representation of a patient.

Using this “digital clone”, the surgeon would then remotely orchestrate the operation on a virtualization of the patient while one or more robots perform the actual surgery. The doctor would have a tactile yet virtual “experience” as bones, tissue, and organs will all “feel” differently. The full measure of telesurgery won’t be possible for perhaps a decade but will continue to advance in stages as 5G and robotics mature.

So Why Not Now?

Besides the fact that the robots and the entire “ecosystem” required to enable telesurgery and other next-generation robotic applications are still in their infancy, current 4G networks simply do not have the characteristics required to make them possible. That is, as they require virtually instantaneous response times, it will be essential to reduce a metric called latency to unprecedented levels. Latency is basically the time span between when input is initiated at one point in a communications link and when it returns with error-free input from another point. Low latency is vital for high reliability machine-centric communication for robotics of tomorrow.

Current 4G Long-Term Evolution (LTE) cellular networks have round-trip latency of about 50ms but to enable applications such as robotics the 5G standard recognizes that <1ms will be required, a colossal technical challenge. Other promised benefits of 5G, such as cloud computing and increasing data rates, are relatively “simple” when compared to reducing latency to such a minute level, as it faces the immutable laws of physics.

To understand this, consider that the speed of electromagnetic radiation in a vacuum is 3 x 108m/s. As the Earth’s atmosphere is not a vacuum this top speed is reduced ever so slightly because of atmospheric air. However, its propagation speed is dramatically reduced by further considerations, including the optical fibers, terrestrial and satellite communication links, and the electronics and interconnects through which a signal must pass. The upshot is that the shorter the physical distance between Point A and Point B, the lower latency time can be. This this is how 5G intends to accomplish its goal of reducing this metric to <1ms.

5G will require the number of data centers that collectively form the cloud to be dramatically expanded geographically, as a data center in one location is likely to be too far away from most other locations to reduce latency time to acceptable levels. This expansion, combined with data rates greater than 1Gb/s and the use of new cellular frequencies—an order of magnitude higher than those presently employed—will be essential ingredients that allow distances ranging from 1–100km to be covered with <1ms latency.

5G will play a crucial role in creating the factory of the future, another application in which <1ms latency is essential. In combination with the almost limitless processing and data storage available in the cloud, 5G communications will allow robots in next-generation manufacturing environments to do far more than they can today. Robots will be able to exchange large amounts of information between themselves and the factory workforce, revolutionizing the “shop floor” along with other 5G-enabled devices such as wearables and technologies such as augmented reality (AR).

As robots will become mobile and able to interact with people, significant increases in production throughput should be achievable along with greater product quality and operator safety. To maintain very low latency throughout this reimagined factory, it will be necessary to rely heavily on edge computing within the network. Edge computing brings intelligence and functionality to the “edges” of a network where the actual applications reside, similar to what distributed computing achieved decades ago.

Robots on the Field

The “untethering” of robots via 5G and GPS-based geolocation will allow them to perform functions impossible today. For example, in agriculture, robots could wander through fields monitoring growing conditions and sending video and other sensor information back to a computer located virtually anywhere, or even perform activities such as spraying, pruning, and harvesting. A company called FFRobotics has developed what it calls a fresh fruit robotics harvester that combines robotic controls with image-processing software algorithms that allow it to find and distinguish between saleable and damaged produce as well as between fruit that is neither ripe nor dead. 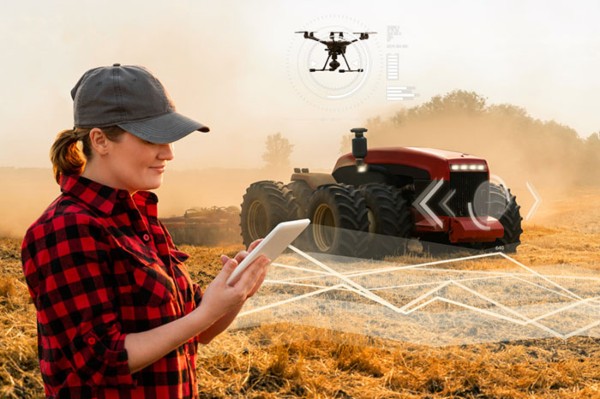 Figure 2: Not the usual vision of a robot, but robotic nevertheless, this tractor can traverse fields commanded by 5G, allowing one controller to supervise multiple tractors. (ShutterStock/Scharfsinn)

A technology called High-throughput Plant Phenotyping (HTPP) combines genetics, sensors, and robots that could be used to develop new crop varieties, as well as improved nutrient content and tolerance to environmental conditions. This would be accomplished using the sensors on robots to measure various characteristics and send their findings back to for analysis to scientists who could be located virtually anywhere. Other robots are being developed to plant and track seeds to improve the efficiency of farming and many other aspects of agriculture that people now perform. In the future, many are likely to be performed by remotely controlled machines.

Qorvo is leveraging its product capabilities across low frequencies up through millimeter wave to respond to the product demands of the next generation 5G networks for sub-6GHz and millimeter wave solutions. A wide variety of products are embedded in ongoing 5G field trials, Qorvo has multiple product development engagements with top OEMs to intersect network operators’ timelines for deployment of 5G networks. Let’s take a look at some of the specific technologies and products that is bringing 5G and the future of robotics into reality.

It’s important to keep in mind that 5G won’t simply transform robotics overnight, as many of the applications and technologies to achieve it are today either embryonic, in development, or just on the drawing board. Rather, 5G should be viewed as the beginning of a new era in telecommunications that fully enables robotics and many other applications for the first time. In addition, mobile robots are also a long way from being a mature technology and it will likely take years before they are massively deployed in applications ranging from manufacturing and production to agriculture, search-and-rescue operations, wide-ranging search and rescue operations, and many others.

5G will require enormous levels of innovation in every aspect of the network, from the development of millimeter-wave communications systems to software-defined and virtual network architectures, and new wireless access methods that make it possible for many robots to operate in a small area without interfering with each other. Looming above it all is latency, which researchers must find a way to reduce to virtual insignificance.

Barry Manz is president of Manz Communications, Inc. He has worked with over 100 companies in RF, microwave, defense, test and measurement, semiconductor, embedded systems, lightwave, and other markets. He edits for the Journal of Electronic Defense, Military Microwave Digest, and was chief editor of Microwaves & RF magazine.