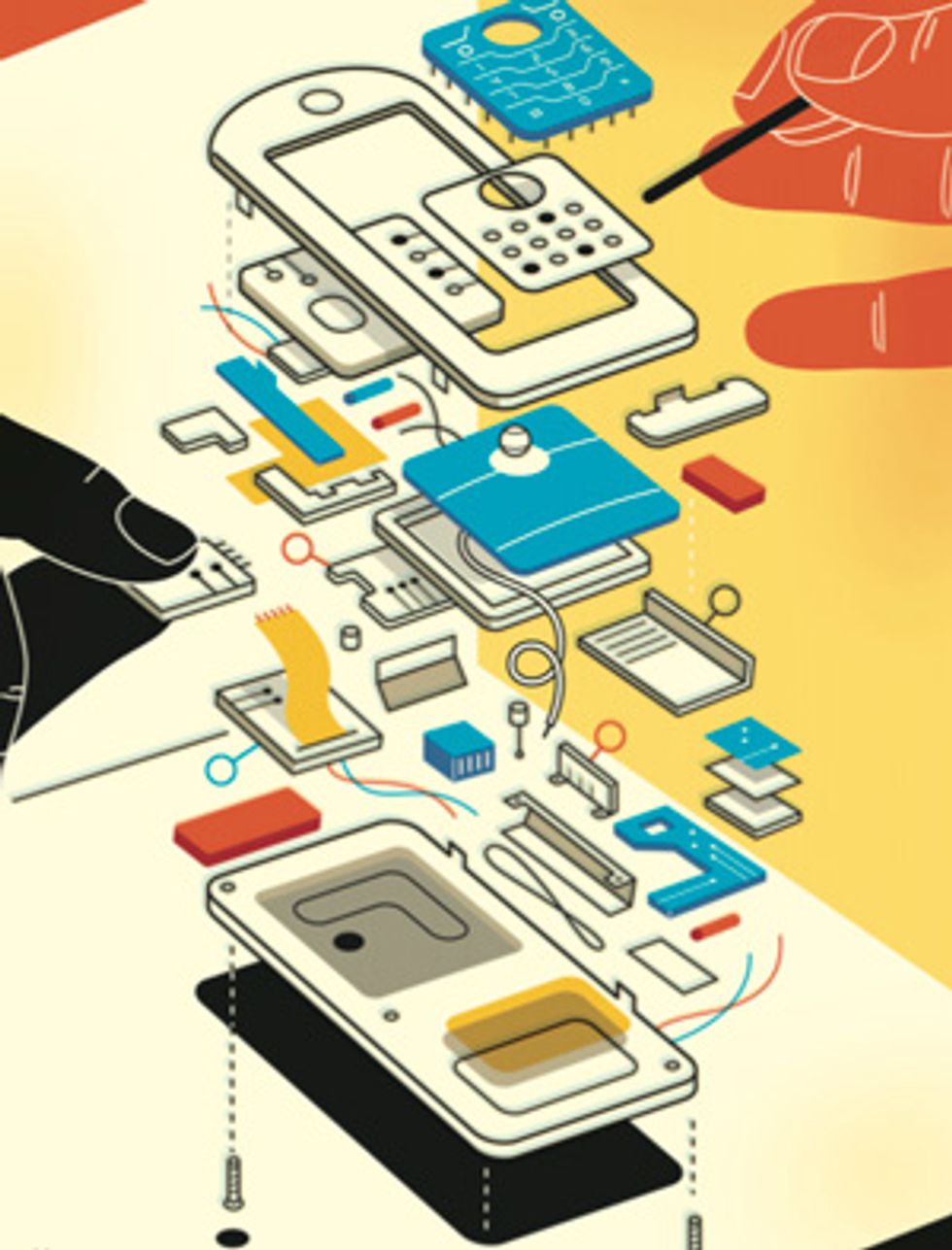 We do love our cellphones. And we hate them, too, of course—when they drop a call, go dead in the middle of a conversation, or simply fail to work in another country. Soon we’ll probably be complaining about other things—perhaps that our handsets can’t receive satellite TV broadcasts or last more than a week on a single charge.

You might guess that better microelectronics will soon provide higher data rates, lower power consumption, and greater flexibility in the types of communication that our handsets can manage. To some extent, that’s true. But transistor advances alone will probably not be enough. The Moore’s Law world of regularly doubling transistor densities has brought us cheap PCs that outperform the multimillion-dollar mainframes of 30 years ago, but those incredible shrinking transistors might not do much to eliminate dropped calls. In this respect, the most significant improvements may, in fact, come from what seems a bizarre source: better mechanical components.

The idea of adding a bunch of moving parts to a radio handset conjures up images of cellphones outfitted steampunk style with brass levers and steel gears. This, of course, is not what I mean. Rather, I’m suggesting that tomorrow’s designs will benefit from advances in the kinds of mechanical devices already found in cellphones and other wireless equipment. If you don’t believe your phone contains such things, open up the back and take a look. You’ll see a battery and integrated circuits—and also such things as thin-film bulk acoustic resonators (FBARs), surface acoustic-wave (SAW) resonators, and quartz crystals. These components, which convert electrical signals to mechanical displacements, do the work that electronics struggle with—for example, selecting a narrow band of radio frequencies and removing interfering signals from all the energy captured by the antenna, and synthesizing extremely stable oscillating waveforms, which are needed to process the incoming radio-frequency signals.

This vision of wireless gear evolving to include more and better mechanical devices of this sort is very different from the approach some radio engineers are now pursuing. They seek to eliminate analog filters and use digital circuits to handle everything—interfering signals and all—using software to do all the filtering. The problem with building such a fully software-defined radio is that the ultrafast analog-to-digital converters that could deal with interfering signals in such a setup are not yet available. Worse, when they do become available, they will probably use too much power to be practical for battery-powered handsets.

Doing more of a radio receiver’s up-front work mechanically has many advantages over relying solely on electronics and software. For example, it eases the demands on the electronics used for further signal processing—the additional filtering, analog-to-digital conversion, and so forth—and that in turn saves on the power consumed in that circuitry. This strategy would allow a portable radio receiver to monitor a wide swath of the spectrum at all times without swiftly burning through its batteries. That will be important in the much-anticipated world of cognitive radio, in which our handsets become agile enough to exploit frequencies that are fair game only when a higher-priority user hasn’t claimed them.

It’s likely that better mechanical components, and the cognitive-radio techniques they enable, will usher in the next wave of mobile telephony by giving our cellphones access to much more spectrum. These phones will operate in multiple bands, provide greater data throughput, and minimize if not eliminate the need for wireless providers to drop our calls because traffic exceeds capacity. Consumers will love the result, even if they don’t know anything about the high-tech mechanics that may soon make it possible.

How can mechanical devices outperform electronic ones? One reason is that they generally consume no battery power. Another has to do with the quality factor of the resonating components, a quantity that physicists and engineers denote with the letter Q. The higher the Q, the more selective the resonator will be in responding only to a narrow range of frequencies.

Like any good radio receiver, the one in a cellphone requires resonators with Qs greater than 1000. Resonant electrical circuits, typically built with capacitors and inductors, have great difficulty achieving values that high. Indeed, the inductors in conventional integrated circuits are dismal, generally yielding circuits with Qs of less than 10. Vibrating mechanical resonators, on the other hand, can easily provide values in the required range.

Unfortunately, the need for such resonators makes handsets more costly to manufacture. If tomorrow’s cellphones were to use many more of these mechanical components, the expense of including them could well dominate the cost of handsets. And the large sizes typical of these mechanical components could be a problem, too, although some are already quite small. Makers of FBARs, for example, use micromachining to construct on-chip gigahertz-frequency resonators with dimensions of about 200 micrometers.