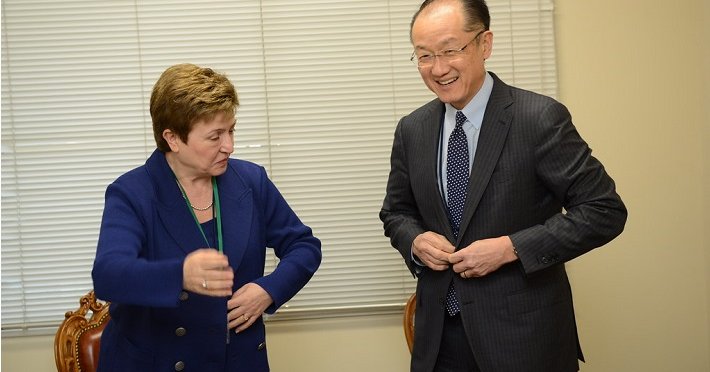 “Torture the data until they confess” (or until you’re busted), economists profess

Georgieva is a Bulgarian neoliberal economist who climbed the ranks at the World Bank
World Bank
WB
The World Bank was founded as part of the new international monetary system set up at Bretton Woods in 1944. Its capital is provided by member states’ contributions and loans on the international money markets. It financed public and private projects in Third World and East European countries.

It consists of several closely associated institutions, among which :

1. The International Bank for Reconstruction and Development (IBRD, 189 members in 2017), which provides loans in productive sectors such as farming or energy ;

3. The International Finance Corporation (IFC), which provides both loan and equity finance for business ventures in developing countries.

As Third World Debt gets worse, the World Bank (along with the IMF) tends to adopt a macro-economic perspective. For instance, it enforces adjustment policies that are intended to balance heavily indebted countries’ payments. The World Bank advises those countries that have to undergo the IMF’s therapy on such matters as how to reduce budget deficits, round up savings, enduce foreign investors to settle within their borders, or free prices and exchange rates.

When the Bretton Wood fixed rates system came to an end in 1971, the main function of the IMF became that of being both policeman and fireman for global capital: it acts as policeman when it enforces its Structural Adjustment Policies and as fireman when it steps in to help out governments in risk of defaulting on debt repayments.

As for the World Bank, a weighted voting system operates: depending on the amount paid as contribution by each member state. 85% of the votes is required to modify the IMF Charter (which means that the USA with 17,68% % of the votes has a de facto veto on any change).

http://imf.org
in 2019. In her prior job as Bank operations chief, she was a capitalist spin-doctor on behalf of China, with the permission of Bank president Jim Yong Kim, an ex-leftist who in his days as a public health advocate had favoured the Bank’s “abolition” due to its staff’s relentless harm-doing.

Georgieva’s travails – including The Economist’s call for her resignation – reflect an ongoing curse personified by IMF leadership. The toxicity at 18th and H Sts, NW Washington DC emanates not just downwards from its diseased research brain and lending division, but upwards to the very top: the Managing Director post.

Recall the unbroken record of IMF degeneracy since 2004, initially featuring the criminally-charged MD Rodrigo de Rato who was later jailed for financial fraud, his successor Dominique Strauss-Kahn who resigned in disgrace after rape prosecution began in 2011 (the civil claim by a New York hotel cleaner was later settled out of court), and his successor Christine LaGarde who was convicted in a French political bribery case in 2016.

Georgieva’s crime was more mundane: working with colleagues to manipulate the Bank’s annual Doing Business rating report – a poverty-amplifying project that ranks countries on how well they have deregulated local capitalism for global corporates and local businesses alike. Labour movement watchdog Peter Bakvis has provided the strongest critiques of Doing Business over the years, and celebrated its demise last month due to the scandal.

At the Bank presidency, Trump appointee David Malpass just responded to the data-credibility crisis by making chief economist Carmen Reinhart – until last year a Harvard professor – a member of the senior management team, so as to give the impression he was elevating the tradition of unbiased scholarly honesty. Perhaps Malpass believes the world has forgotten Reinhart’s own reactionary role in “torturing the data until they confess,” when writing alongside former IMF chief economist Kenneth Rogoff. That 2013 episode of foisting neoliberal debt-trap dogma on the world – unveiled as a data-distorting sham by a U.Massachusetts PhD student – reminds of the lax quality control process at the apex of the Bretton Woods Institutions.

In Doing Business 2018, Georgieva injected such blatant data dishonesty that two former Bank chief economists – Anne Krueger and Paul Romer – condemned her, although another – Joe Stiglitz – gave high-profile backing to Georgieva, but for what appear to be opportunistic reasons, not well justified by reality. As Stiglitz put it,

The fallout from Georgieva’s Doing Business indecency was reinterpreted by Stiglitz as a right-wing “coup attempt.” To be sure, the Washington and Tokyo regimes hate Beijing with irrational zeal, so her flattering of Chinese capitalist policy-makers – to make them appear more pro-business than they are (especially in the wake of exchange control tightening following two major stock market crashes in 2015-16 for which Xi Jinping should have been applauded) – and the U.S.-Japanese desire to harass China together represent yet more childish geopolitricks.

Meanwhile, the Europeans were desperate to keep Georgieva in place, fearing this latest scandal could derail their traditional control of the IMF – having borrowed pre-1994 South African signage for the MD door, i.e. the old “Europeans Only” plaque. In exchange, U.S. leaders bully everyone so as to keep the World Bank presidency to themselves, no matter the fools they continue to impose on the institution.

But even if Stiglitz is effusive, the rest of us must never forget: if you run the IMF, by definition you have to be one of the world’s most brutal people. So if you “provide funds to keep countries afloat and to address the health crisis,” as Stiglitz claimed the IMF has done, that didn’t help South Africans who received a controversial $4.3 billion loan from Georgieva in August 2020, featuring these stereotypical IMF albatrosses:

Tragically, there was no alternative lending institution to turn to instead, especially the fabled $100 billion Contingent Reserve Arrangement of the Brazil-Russia-India-China-South Africa BRICS bloc. It was launched in 2014 with anti-IMF rhetoric, but has never been actually sighted and doesn’t seem to actually exist.

Stiglitz’s other claims are just as dubious. Issuing $650 billion in Special Drawing Rights – the IMF’s version of central-bank Quantitative Easing – is biased to rich economies and offers merely tokenistic aid to the majority of poor countries (they received only $33 billion). SDR expansion fuels the kinds of speculative-financialised trickle-up economics that Strauss-Kahn accomplished when creating $750 billion worth of new SDRs in 2009.

Likewise, the IMF’s climate politics are unjust: their documents – including the latest Finance&Development house journal – refuse to countenance the most basic principle of environmental economics: “polluter pays.” If they did, the IMF’s Western and BRICS shareholders would be furious at the vast climate reparations that they owe. (If the “Social Cost of Carbon” is $3000/ton as new research suggests, even South Africa’s government would owe – each year – more than three times as much as the economy’s annual GDP
GDP
Gross Domestic Product
Gross Domestic Product is an aggregate measure of total production within a given territory equal to the sum of the gross values added. The measure is notoriously incomplete; for example it does not take into account any activity that does not enter into a commercial exchange. The GDP takes into account both the production of goods and the production of services. Economic growth is defined as the variation of the GDP from one period to another.
.)

Moreover, Stiglitz’s defense of the statistically-corrupt Georgieva hinges on testimonials by Shanta Devarajan, who took over the Bank’s Doing Business but who formerly was its chief economist for Africa where I tangled with him about gaping holes in his own “Africa Rising” data, on his own blog and Canadian radio.

It’s also quite silly of Stiglitz to make this easily-checked claim: “A quarter-century ago, when I was chief economist of the World Bank and Doing Business was published by a separate division, the International Finance Corporation, I thought it was a terrible product.” Yet in the same 2002 book in which he thoroughly nailed the IMF for its neoliberal dogmatism, Globalization and its Discontents, Stiglitz offers nary a word about Doing Business.

Indeed, it’s quite revealing that the very origins of Doing Business can be found in a Bank World Development Report that was under the control of Stiglitz – then Bank chief economist – just before he was fired in late 2001 by James Wolfensohn (on grounds he was promoting a woolly, passive-aggressive Post-Washington Consensus ideology slightly to the left of the WashCon). The origin-story controversy was covered at length in the Journal of Economic Perspectives, and in this brief report locating the seeds of Doing Business with Georgieva compatriot Simeon Djankov, Hernando de Soto (the Peruvian business-deregulation huckster) and corruption-scandaled Andrei Schleifer from Harvard.

The outside observers to the Georgieva scandal now seem to fall into three categories:

The IMF and Bank leaders begun their annual meetings this week and sadly, activists of an earlier generation have not reproduced outside those rooms. If we were talking 21 years ago in Prague with truth-telling by South African poet Dennis Brutus – or 21.5 years ago in Washington when Soweto activist Trevor Ngwane taught 30 000 protesters the toyi-toyi activist war dance – we could add the dimension of street heat. Not this time around.

Nevertheless, I see all this as generally positive:

Gossip and this personality battle aside, the bigger questions of whether the IMF and World Bank do more harm than good to society, ecology and economies can surely be raised, at the same time? Beyond the whimsical matter of imperialist multilateral institution leadership, most importantly, this affair offers an opportunity to question the BWIs’ credibility, legitimacy and right to exist.

With De Rato, Strauss-Kahn, Lagarde and Georgieva at the 21st century IMF and Wolfensohn, Wolfowitz, Kim, Malpass, Djankov and Schleifer at the Bank, conditions remain ripe for breeding furious anti-establishment populism. Heads rolling are one solution, but thus far every time, a new head with the same thinking takes the last one’s place.

Indeed this elite stumbling reminds that a more profound idea – “Defund the Bank and IMF!” – was a common slogan twenty years ago, one even Stiglitz was then sympathetic to, in relation to the IMF:

“The problem is that some of the institutions we have are not democratic, they’re not transparent. They reflect special interests within the advanced industrial countries. They do not represent the concerns of the poor and the developing countries. I used to say that since we are going to need these institutions, it is better to reform them than to start from scratch. I’m beginning to have second thoughts. I’m beginning to ask: has the credibility of the IMF been so eroded that maybe it’s better to start from scratch? Is the institution so resistant to learning to change, to becoming a more democratic institution, that maybe it is time to think about creating some new institutions that really reflect today’s reality, today’s greater sense of democracy.”

(Patrick Bond is professor of sociology at the University of Johannesburg in South Africa and can be reached at pbond [at] mail.ngo.za.)