LONDON: Nearly a year into the Taliban’s return to power in Afghanistan following the US military withdrawal, there is mounting concern that the bankrupt, unstable and internationally isolated country could once again become a sanctuary for extremist groups and even a launchpad for global terrorism.

The US beat a rushed retreat from Afghanistan in August 2021 after reaching a shaky peace deal with the Taliban, whose leaders pledged to never again offer sanctuary to extremist groups such as Al-Qaeda, which had plotted the 9/11 attacks from Afghan soil.

The hope was that Afghanistan would not become a hotbed of international terrorism as it had been in 2001, and that a plot for an attack of 9/11’s magnitude would never again emanate from the country.

But in common with millions of Afghans, not many South Asian observers were convinced of the Taliban’s sincerity, believing instead that the country was being hijacked yet again by a violent and insular fundamentalist group.

“I do think that Afghanistan has already become a hive of terrorism,” Ahmad Wali Massoud, a former ambassador of Afghanistan to the UK, told Arab News.

Massoud is the younger brother of Ahmad Shah Massoud, the Tajik guerrilla commander who until the Taliban’s return to power last year was feted as Afghanistan’s national hero.

“The US departure from Afghanistan was very unrealistic, very irresponsible, it was not coordinated well, and ignored the people of Afghanistan,” Ahmad Wali Massoud told Arab News.

“The US left their allies, the people of Afghanistan, the security forces of Afghanistan, which they helped for almost 20 years. They completely ignored them. They left them alone to the mercy of terrorism, of the Taliban, of extremism.”

Today, Ahmad Wali Massoud’s nephew, Ahmad Massoud, heads the National Resistance Front against the Taliban in his native Panjshir, north of Kabul, where his father had famously resisted the Soviets and the Taliban decades earlier.

Recent fighting in Panjshir does not still represent a challenge to the Taliban’s control of Afghanistan, but it is the most significant and sustained armed opposition the group has faced since returning to power.

For Massoud and others, the idea that, once in power, the Taliban would act less like an insurgent movement and more like a government for all Afghans, was not quite grounded in reality.

With political violence now rife across the country, freedom of speech curtailed, and the rights of women and girls eroding steadily, war-weary Afghans’ mood is one of deepening pessimism.

Responding to the developments since last August, the US and global financial institutions have frozen Afghanistan’s assets, withheld aid and loans, and sought to isolate the Taliban regime.

As a result, the Afghan government is perpetually on the brink of economic collapse and, in some parts of the country, the specter of famine looms. Almost half the population — 20 million people — is experiencing acute hunger, according to a UN-backed report issued in May.

On Wednesday, the country faced a new humanitarian crisis when a magnitude 5.9 earthquake struck the country’s east, killing more than 1,000 people and injuring another 1,500. Most of the deaths occurred in the provinces of Paktika, Khost and Nangarhar.

Additionally, the Taliban finds itself battling a violent insurgency led by Daesh’s local franchise, the Islamic State in Khorasan, or IS-K, which in recent months has repeatedly targeted members of minority communities including Shiites, Sikhs and Sufis.

A recently released UN report says IS-K has between 1,500 and 4,000 fighters, “concentrated in remote areas” of Kunar, Nangarhar and possibly Nuristan provinces. According to the study, smaller, covert cells are located in northern and northeastern provinces, including Badakhshan, Takhar, Jowzjan, Kunduz and Faryab.

While the Taliban is satisfied with setting up an Islamic polity within Afghanistan, the goal of IS-K is to create a single state for the entire Muslim world, according to scholars of political Islam.

IS-K is seeking to exploit dissension within the Taliban ranks over whether the group should embrace pragmatism or ideological purity. The tensions are intensified by the hodge-podge of entities in Afghanistan, including Daesh, the Pakistani Taliban and Al-Qaeda.

The Taliban’s dilemma as it tries to govern a country that has experienced 20 years of Western-led modernization was predicted by Kamran Bokhari in an op-ed in The Wall Street Journal on Aug. 27, 2021.

“The Afghan Taliban have to change but can’t — not without causing an internal rupture,” he wrote. “Such changes … require a long and tortuous process, and even then, transformation remains elusive.

“The risk of fracture is especially acute when a movement has to change behavior abruptly for geopolitical reasons.”

On the one hand, the number of bombings across Afghanistan has dropped since last August and Taliban 2.0 cannot be accused of directly sponsoring terrorism. On the other hand, the ensuing collapse of state authority in some rural areas and the loss of Western air support for counterinsurgency operations have been a blessing to extremist groups.

“It has galvanized and energized an Islamist extremist network for which the expulsion of US troops from Muslim soil and the elimination of US-aligned governments are core goals. The takeover has also brought into power a group with close ideological and operational links to a wide range of militant groups.

“This means at the very least that the Taliban won’t try to expel these groups from Afghan territory, and in the case of the one group that it is targeting, IS-K, it lacks the discipline and capacity to undertake careful and effective counterterrorism tactics.

“On a related note, the Taliban lack the capacity to operate air power, which had been the main means used by NATO forces and the Afghan military to manage the IS-K threat. Furthermore, the Taliban has no ability to ease an acute economic crisis, and the widespread deprivation fosters an environment ripe for radicalization. This benefits the IS-K.”

Since the US withdrawal from Afghanistan, the international community’s patience has flagged and attention has shifted towards the war in Ukraine and the alarming prospect of a direct confrontation between Russia and NATO states.

Kugelman believes the terror threats emanating from Afghanistan fell off the radar long before Russia invaded Ukraine in February.

“I would argue that the world was letting the terrorism threat in Afghanistan fester well before the Ukraine war, mainly because the US had struggled to build out the capacity to monitor and target terrorist threats in Afghanistan from outside the country,” he told Arab News .

“This isn’t a big problem now, given that the threat is not what it used to be. But if this neglect allows the global terrorism threat in Afghanistan to gradually grow back and the US and its partners still don’t have a plan, then all bets are off and there could be big problems.”

To be sure, the situation in Afghanistan is still very different from that of pre-2001, when the entire Al-Qaeda leadership was based in the country as guests of Mullah Omar, the founder and then-leader of the Taliban.

Al-Qaeda and its then-leader Osama bin Laden had initially been welcomed to Afghanistan by Abdul Rasul Sayyaf, a Mujahideen leader, after bin Laden’s 1996 expulsion from Sudan.

In Afghanistan’s political and geographic isolation inherited by the Taliban, Al-Qaeda was able to freely plot its attacks against the US.

In April 2001, just a few months before 9/11 and his own assassination at the hands of Al-Qaeda operatives, Ahmad Shah Massoud had addressed the European Parliament in Strasbourg, warning the West would pay a heavy price if it continued to allow extremism to fester in Afghanistan.

Does that fateful speech have any relevance to the current situation?

“While one should never be complacent, it’s safe to say the global terrorism threat emanating from Afghanistan isn’t as serious today as it was when Massoud issued his warning in 2001,” said Kugelman.

“Al-Qaeda has become much weaker and the only other group in Afghanistan with globally focused goals is a Daesh chapter that currently cannot project a threat beyond the immediate region.

“That said, let’s be clear: With NATO forces out of Afghanistan and an Al-Qaeda-allied regime now in power, the ground is fertile in the medium term for international terror groups to reconstitute themselves — and especially if we see new influxes of foreign fighters into Afghanistan that can bring shock troops, arms, money, and tactical expertise to these groups.”

In exile in Europe, Ahmad Wali Massoud is convinced that the Trump and Biden administrations made a grave error in deciding to negotiate with the Taliban and in withdrawing from Afghanistan.

Allowing the group to return to power, he believes, will inevitably transform Afghanistan into a terror heartland — a development he is convinced, just as his brother warned, will come back to haunt the West.

“I think, by now, they must have realized, after almost a year, that they have made a mistake, because they know now that the Taliban is out of control,” Massoud told Arab News. 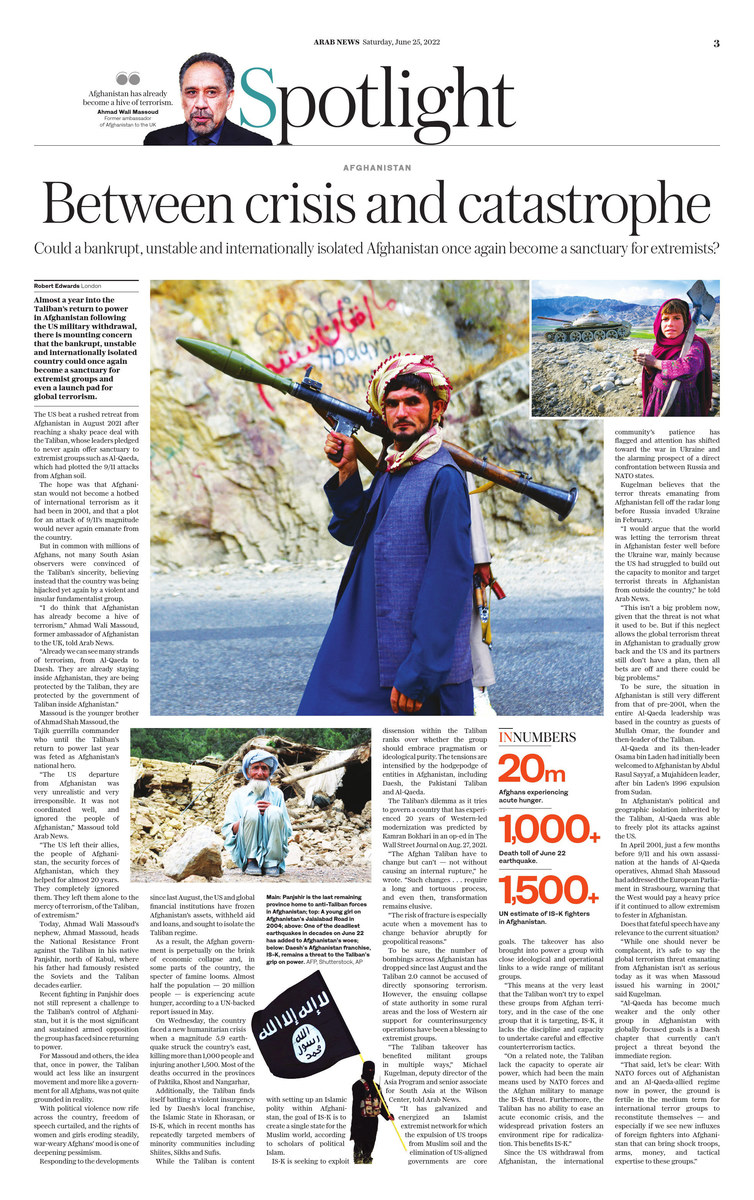