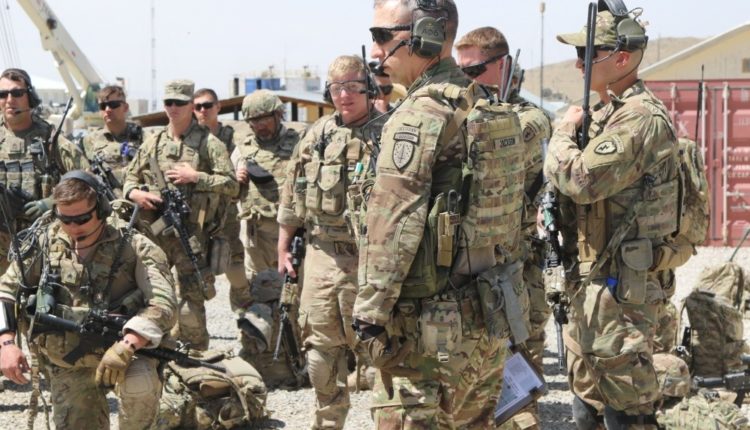 IMPLEMENTATION OF ABARDIN, DR (September 5, 2018) – With the creation of the Army’s first unit, the Council and Assistance, known as the Security Assistance Brigade (SFAB) in February 2017, came the immediate need to These soldiers are equipped with a small team of sustainable communication equipment needed for rapid deployment in the theater, and missions in a wide operational area.

To deploy this equipment, the Command, Control and Communications of the U.S. Army Executive Office (PEO C3T) has partnered with the U.S. Army Inter-Functional Network (CFT) team, Communications-Electronic Command (CECOM), Communications and Electronics Research, Development and Engineering Center (CERDEC) and PEO Soldier for equipping the brigade with radio stations, satellite terminals and other standard and non-standard communication equipment.

While a typical field field – which includes preparation, implementation, training and a field field – can take up to two years, the 1st SFAB was upright, equipped and trained for deployment in Afghanistan in less than a year. Despite this accelerated schedule, it was essential that SFAB’s efforts be implemented exactly as a standard field, starting with the development of a list of required equipment and then implementing a resource, training and maintenance plan for the equipment set.

“We wanted to ensure that the soldiers were confident in their equipment and training,” said Eric Helm, supervisor for special projects for PEO C3T. “Soldier safety is paramount to us, as is ensuring that equipment works as needed to support SFAB’s mission.”

A critical component of the task was to identify the appropriate combination of systems that would allow SFAB operations. For example, the military has set up a secure but unclassified (SBU) network environment that allows coalitions to communicate and be interoperable through secure information exchange using commercial and military transportation. The SBU capability is used by Nett Warrior Future Initiative’s (NWFI) integrated set of 2-channel radios with advanced network waveforms, radio gateways, low-aperture satellite terminals, and connected ancillary devices. In addition, to ensure that SFAB could plan, configure, and manage the Army Network with Software Defined Radio Stations (SDRs), the Army sent the joint corporate network manager. With JENM, the first SFAB can configure SDR and allow them to take advantage of the waveforms of the Mobile Ad Hoc Network (MANET).

SFABs were also equipped with satellite communications forwarding equipment (SATCOM), which provides transmission to units that require network connectivity. As a specialized network center for SFAB, these terminals allow units to connect directly to the tactical network in Afghanistan. They also serve as a gateway to the secure but unclassified (SBU) network, which allows units to connect to commercially available networks to share data, images and messages between team members.

Another challenge due to the compressed timeline was the completion of the installation of the equipment and the integration of the vehicle. Equipment and training missions for the 1st SFAB were completed in Fort Benning, Georgia, to ensure that soldiers were prepared for their deployment, but soon rotated field remnant equipment operations and provided field support during the theater. This allowed the unit to continue training soldiers, maintain communication hardware, install radio software upgrades, troubleshoot network anomalies, and provide other critical support.

To ensure that SFAB equipment continued to meet mission requirements, CPT Jonathan Dodge, Assistant Product Manager for Handheld, Manpack and Small Form Fit (HMS), was deployed in Afghanistan to provide practical support for the first SFAB. CPT Dodge serves as a liaison for the PEO C3T team and provides frontline support if needed, including assistance with field and related training for radios and other network equipment.

“The built-in team provided basic training and support for the 1st SFAB Network for Lower Tactical Internet (TI). The expert provided by our technical supervisor, along with the feedback we gathered on product performance, allowed positive changes to be made to the theater’s communication architecture, “Dodge said.

Using lessons learned from the first deployment, the Army is implementing changes to streamline and improve flight and training efforts for future SFAB missions. For example, during the first SFAB field, the AN / PRC-148C radios were gradually fielded when the parts became available instead of being assembled.

The theory was that soldiers would be able to use the radio system when the parts became available, but in reality this led to soldiers not knowing what a complete “kit” should look like, said Mr. Kevin Gonzalez, Capability Set Team Leader. integration for PEO C3T. “This has also led to soldiers postponing the systems until all relevant components have reached them.” Moving forward, placing the entire system at once will allow the unit to train while fighting.

Support for additional SFAB units continues, beginning with the deployment of the second unit, located in Fort Bragg, North Carolina, and the third unit, based in Fort Hood, Texas.

One major advantage that the 2nd SFAB will have over the 1st is that they will be pre-deployed with small, medium and large very small aperture terminals (VSAT) that provide vital access to the tactical mission command network. , calls for fire, Medevac and information exchange. VSATs can also be deployed faster than larger satellite terminals, making them easier to navigate the battlefield.

In addition, the third SFAB will be upgraded to the latest version of the TSM waveform, which provides stable, reliable and scalable network coverage and is designed to run on multiple SDRs. This upgrade addresses issues previously reported by SFAB 1 and improves compatibility with the Android Tactical Assault Kit (ATAK), which is software that provides awareness of the Nett Warrior end-user situation.

The second SFAB will undergo quarterly training, starting in October, followed by the rotation of the Joint Readiness Training Center (JRTC) in January and deployment in the spring of 2019.

“As the SFAB mission progresses, the Army will continue to apply lessons learned from deployed units to provide the best communication equipment and field support for our troops,” Helm said.

The Command, Control, and Communications of the Tactical Service of the U.S. Army Executive Service develops, acquires, directs, and maintains the Army Mission Command Network to ensure force readiness. This critical priority for army modernization provides tactical communication so that commanders and soldiers can remain connected and informed at all times, even in the harshest and most hostile environment. PEO C3T delivers the network to regions around the world, enabling high-speed high-speed voice, data and video communications to a user base that includes joint, coalition and other partners of the military mission.