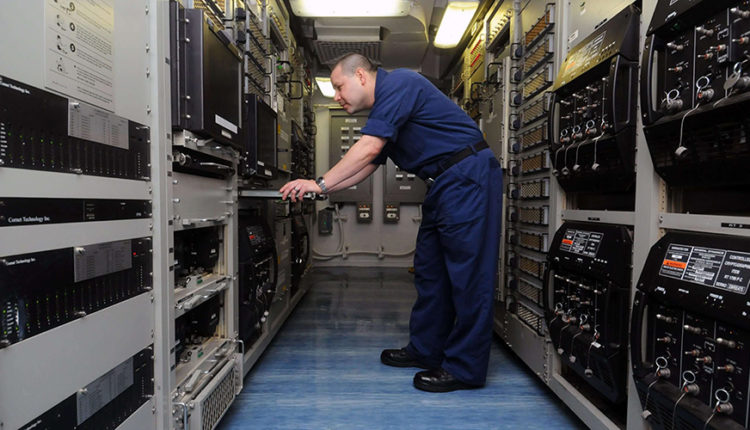 Naval radios for warships are decreasing in size and weight


DMR radios on board a naval ship

The Navy uses the AN / USC-61 (C) (DMR) digital modular radio, which is well established in the US Navy, as well as the newer, more compact software-defined Badger radio to save space, weight and power on board. on ships.

General Dynamics Mission Systems and Badger’s digital modular radios have eight circuits per channel, with DMR having four channels for a total of 32 circuits and Badger being a smaller unit with two channels for a total of 16 circuits, said Bill Rau, deputy. president of surface ship combat systems at General Dynamics. Digital modular radio can handle 18 different waveforms, from ultra-high-frequency tactical voice circuits to satellite communications.

With digital modular radio, the software defines how and what the frequency is, what the power, modulation, crypto will be and then selects the appropriate antenna. It can do this for each of these different circuits in all 18 different waveforms.

The result is that a traditional radio with shelves of transmitters, receivers, power amplifiers, crypto equipment and antenna connectors can be drastically reduced, saving space, weight and power, as well as reducing the amount of heat generated, Rau said.

This is the software that determines the path for each waveform used. Digital modular radio is built around a semiconductor integrated circuit chip called a programmable gate or FPGA, according to Michael Anderson, head of joint technical communications and the software-defined radio group Naval Information Warfare Center-Pacific in San Diego.

“The world of electronics has really changed significantly from the days of the need for massive boards with hundreds of integrated circuits and complex connections to today, when everything fits on one chip,” he said.

Different waveforms can use many different antennas, said Cesar Garcia, head of SATCOM’s control systems branch and head of DMR’s engineering and test integrated products team at the military center. “We can’t communicate with a 23,000-mile satellite in space with a half-centimeter antenna.

Anderson said that “next-generation radios, such as DMRs, can control all of these different devices with a single FPGA-based system on a chip.”

In software-defined radio, waveform is a software application that can change the behavior of mixers, filters, preamplifiers, modulators, and signal detector modulators. The operator can control all circuits for multiple DMRs from a single human-machine interface.

According to Garcia, the use of one type of radio against 18 simplifies training and reduces the logistical footprint. The programmable logic in the radio allows the addition of additional waveforms without the addition of new radio stations. “You have the radio hardware and accessories.

And training is already in place, so you can learn how to use radio with waveform variations using the same control user interface, ”he said. New or improved waveforms can be included without adding more radios, Anderson said. “The only limitation is that these waveforms must be in the frequency range of existing hardware,” he added.

General Dynamics Mission Systems supplied nearly 1,000 digital modular radios to the Navy and the service continues to supply them to the Navy. A more compact Badger has been developed. It provides half of DMR’s capabilities – two channels instead of four – but only in a quarter of the space, Rau said.

Badger reused DMR schemes, but General Dynamics managed to reduce the size by removing some of the interfaces. Badger has basically the same FPGAs as DMR and the same modem and internal crypto hardware, he added.

Badger showed how the DMR capability can fit in a smaller package. The next iteration can be a unit of the same size as the current system, but with twice the capacity – eight channels instead of four.

Software-defined radios are a way to put a lot of features in a box, he said. “It’s powerful hardware that gets its individuality from the software that works on it,” he said.

This SDR includes digital signal processing and has a configurable radio frequency section that can emulate 20 or 30 existing legacy military tactical radios based on various waveforms. It is a transceiver with four independent channels – four antennas connected to it – and each can be tuned to any frequency between 2 MHz and 2 GHz, which covers all frequencies that Navy ships use for communication, Rau said.